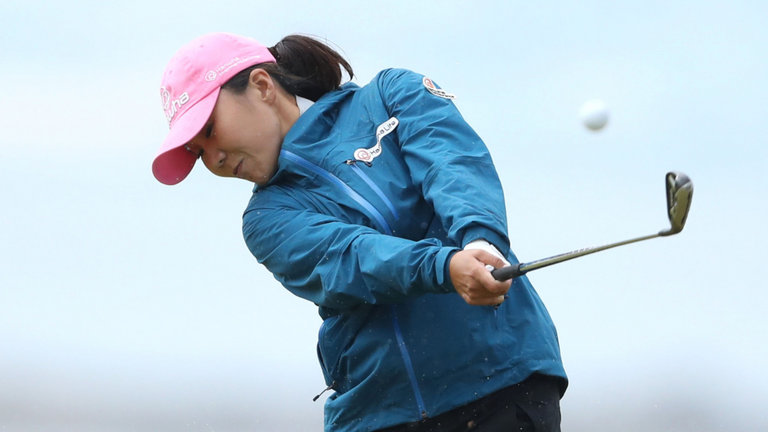 In-Kyung Kim of South Korea has never won a major championship, but she has a firm grip on the Ricoh Women’s British Open after three rounds.

The 29-year-old Kim carded a bogey-free 6-under-par 66 to build a six-stroke lead over Georgia Hall of England and Moriya Jutanugarn of Thailand at Kingsbarns Golf Links in Fife, Scotland.

“I really enjoyed playing today because there was less rain,” said Kim, who missed a one-foot putt that would have given her a first major title in the 2012 Kraft Nabisco Championship, and wound losing to Sun-Young Yoo in a playoff. “They moved some of the tee boxes and it almost created a different course, but it was interesting. I putted quite well, had a consistent routine, and the greens were faster. I felt that from the start today after all the rain yesterday, and just seemed to adjust without trying to.

“I want to got out tomorrow, have fun and keep performing as well as I can. It’s really been amazing. … I just feel like I’ve done a lot of good things on and off the golf course and I think it’s really helping me out. It’s showing on the golf course.”

Kim birdied four of the first seven holes on her way to a total of 17-under 199, breaking the tournament’s 54-hole record of 16-under set by Ariya Jutanugarn last year at Woburn Golf Club, and is on track to smash the 72-hole record of 19-under set by Karen Stupples in 2009 at Sunningdale Golf Club.

Moriya Jutanugarn, whose top-ranked sister missed the cut in her title defense, collected seven birdies in a 67, while Hall went bogey-double bogey on the 16th and 17th holes to finish at 70.

Inbee Park of South Korea, who has seven major titles including the 2015 Women’s British Open, posted a bogey-free 64 that was the low score of the day and is seven shots back in a tie for fourth with Ally McDonald, who wound up at 70.

Stacy Lewis, a two-time major champion who won this tournament in 2014, carded a 65 that included nine birdies and is one stroke down in solo sixth, while Jaye Marie Green, Mi-Hyang Lee of South Korea and Caroline Masson of Germany shot 67s and are nine behind in a tie for seventh with Jodi Ewart Shadoff (71) of England, Angel Yin (69) and Mel Reid (69) of England.

Second-ranked Lexi Thompson struggled to a 74 and is in a tie for 13th that includes first-round leader Michelle Wie of Stanford, who bounced back from a 74 with 69.