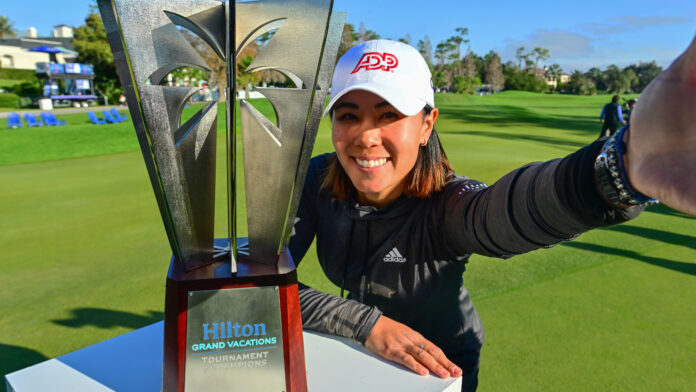 The 29-year-old Kang, who was winless last season after winning five times in the previous four seasons, carded a 4-under-par 68 to win the Hilton Grand Vacations Tournament of Champions by three strokes over Brooke Henderson of Canada at Lake Nona Golf Club in Orlando, Fla.

“My mental game was really good,” said Kang, who played college golf at Pepperdine. “I had a really good attitude all day today and yesterday. I know I left some putts out there, but I never let it get to me, and I kept having to give myself birdie chances as much as possible.

“In the past, I often was so concerned about what had already happened and what was coming up, but I did a great job of staying in the moment today and concentrating on the shot at hand. I just concentrated on focusing on each shot.

“Last year was tough on me, but it made me a better person and player. I’m happy to win this tournament because it means I will be back here in 2023.”

“It wasn’t really the day I was looking for,” said Henderson, who has won 10 times on the LPGA Tour and 15 times as a pro. “At the same time, you grind it out pretty well, and I was happy to make two birdies. Unfortunately, that wasn’t enough. Still proud of how we played out there today in those tough conditions.

“Danielle played amazing, so it was pretty cool to watch her go so far ahead of everybody else. I came into this week thinking I had put in some solid work in the offseason, so it’s nice to see that it’s paying off. Hopefully, I can use this momentum over the next couple of weeks and get a couple more top finishes.”