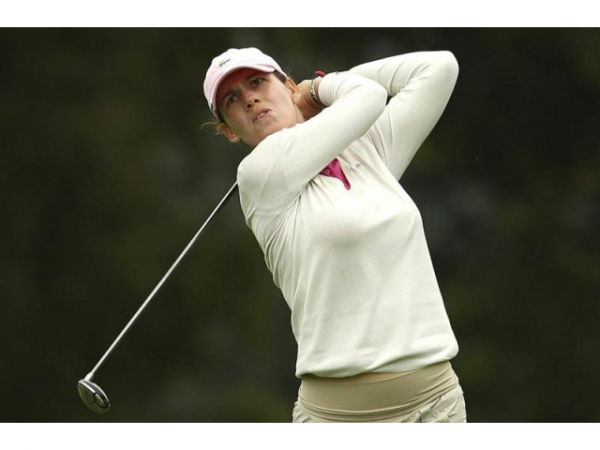 Karine Icher of France posted a bogey-free 6-under-par 66 to lead five players by two shots after the first round of the Swinging Skirts LPGA Classic at Lake Merced Golf Club in Daly City, just outside of San Francisco.

Darkness halted play with several players still on the course after the start was delayed for two hours by fog.

The 35-year-old Icher, who has won five times on the Ladies European Tour but is winless on the LPGA Tour, started at No. 10 and carded four birdies on the back nine before adding two on the back, including a five-foot birdie putt on the ninth hole.

Icher said she and her husband-caddie, Fred, determined that the best way to play Lake Merced is to stay below the hole.

“I think it’s the key on this course,” said Icher, whose best finish on the LPGA Tour was second in the 2004 Corona Morelia Championship in Mexico. “It’s a tough golf course, especially with the wind and temperature. It gets so cold. You try to stay warm and try to catch the right wind and go with it and make some putts.”
Lydia Ko of New Zealand, playing on her 17th birthday, recorded six birdies in a round of 68 and was tied for second with Dewi Claire Schreefel of the Netherlands and USC, Ilhee Lee of South Korea, Maria McBride of Sweden and Jenny Shin of South Korea.

Morgan Pressel had four birdies in her first eight holes en route to a 69 and was tied for seventh with Stacy Lewis, Christel Boeljon of the Netherlands, Hyo Joo Kim of South Korea and Mo Martin of Pasadena and UCLA.

Suzann Pettersen of Norway, ranked second in the Rolex Women’s World Golf Rankings and playing for the first time in more than a month after recovering from a back injury, was tied for 12th at 70 despite a triple-bogey 7 on the 11th hole..