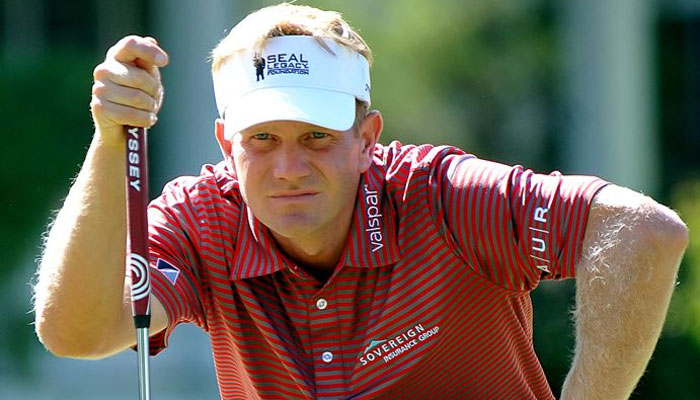 Hurley, a 2004 graduate of the U.S. Naval Academy who lives nearby in Annapolis, shot a bogey-free 4-under 67 on Saturday to take a two-stroke lead over Ernie Els of South Africa at Congressional Country Club in Bethesda, Md.

Hurley, who made three birdies on the front nine and added another at No. 14, broke out of a tie for the lead after 36 holes and recorded a 54-hole total of 15-under 198.

“I can’t think of a better one for me to win,” said Hurley, whose only two pro victories came on the mini-tours. “To be my first one on tour, it would be probably the best one of kind of the regular-season tournaments, for sure.

“(His military experience) definitely helps in adversity on the golf course. Focus, too. When you’re driving a ship through the Suez Canal, it’s all eyes ahead, focused exactly what we’re doing. Land on each side and trying to just keep it in the middle. Focusing on the task at hand is definitely something that I’ve learned, as well.”

The National, which benefits the Tiger Woods Foundation, always has a large military presence because of Woods’ late father, Earl, who served in the U.S. Army as a Green Beret and helped start the foundation and tournament.

Els, who won the 1997 U.S. Open at Congressional but has not won on the PGA Tour since the 2012 Open Championship at Royal Lytham & St. Annes, carded a 65 that included a hole-out eagle from 157 yards on the 12th hole.

“I’m having fun putting,” said Els, who has struggled on the greens in recent seasons.” … ” … When the game gives you something, there’s a lot of excitement there and (his eagle) was really one of the more exciting moments. I don’t think I’ve ever slam-dunked it into the hole like that. I’ve had some run of slopes and run into the hole but that just flew right in. It was a great feeling.

“I can’t but help think about it because I won one of my biggest events here as a pro and I love it so much and obviously one more win will give me the 20, which is huge,” Els said. “On the golf course you think about the next shot and I’m quite focused this week on my next golf shot. I’m not too clogged with that kind of a thought.”

Jon Rahm, the 21-year-old from Spain and Arizona State who held at least a share of the lead after each of the first two rounds in his pro debut, bounced back from four bogeys with a seven-foot birdie putt at No. l6 and was another shot back in solo third after a 70.

“I couldn’t seem to find the rhythm to find the fairway,” said Rahm, who won the Ben Hogan Award as best college golfer in the U.S. the last two years. “With the way I hit the driver, I’m lucky to have finished under par.”

Bill Haas, the 2013 National champion, finished with 11 straight pars after making three birdie in a row to post a 68 that left him five strokes behind in a tie for fourth with Webb Simpson, who had two late birdies in another 68.

Vijay Singh of Fiji, 53, who is trying to eclipse Sam Snead (52 when he won the 1965 Greater Greensboro Open) as the oldest winner in PGA Tour history, holed a 54-foot birdie putt from off the final green to shoot 71 and was seven shots down in a tie for sixth with rookie Harold Varner III, who finished eagle-birdie-birdie for a 70.

Double heart transplant Erik Compton birdied four straight holes on the back nine in a 68 and was another stroke behind in a tie for eighth with Robert Garrigus, who made bogeys on two of the last four holes and wound up at 70.