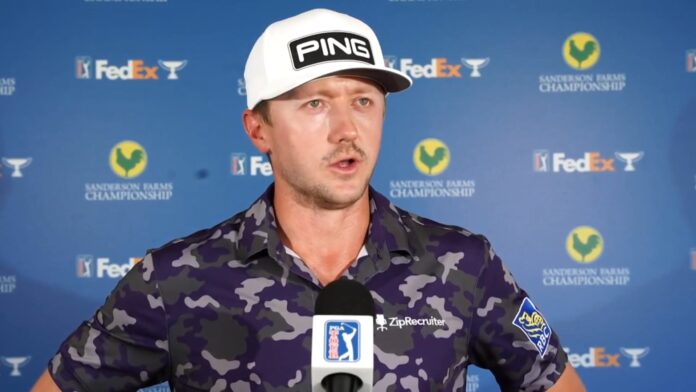 Mackenzie Hughes of Canada chased Thomas Detry of Belgium all day and finally caught him on No. 18.

The 31-year-old Hughes (pictured) birdied three of the last five holes to cap a bogey-free, 8-under-par 63 and tied Detry for the lead midway through the Sanderson Farms Championship at the Country Club of Jackson in Jackson, Miss.

The Sanderson Farms is the second event of the last wraparound season before the PGA Tour goes to a new format in 2024.

“I’ve been putting in a lot of work the last few weeks and my game feel really good,” said Hughes, whose only PGA Tour victory came in the 2017 RSM Classic after he also won once each on the PGA Tour Canada and the Korn Ferry Tour. “It was just really solid today and there wasn’t much stress.

“There are some difficult driving holes on this course, but I was able to hit the fairways and was very good with my irons to give myself a lot of birdie chances. I got off to a really good start and just kept it going all day. And it’s always nice to finish your round with birdies like that, including the last one.

“It was pretty cool.”

Hughes, who tied for 25th in the Fortinet Championship to open the new season, birdied the first three holes and four of the first five to kick-start his 63, before sinking an eight-foot birdie putt on the last hole to finish 36 holes at 10-under 163.

Detry, 29, who is seeking his first victory as a pro, made three birdies on each nine against a single bogey at No. 15 while carding his second straight 67.

“I didn’t drive the ball today as well as I have recently, including yesterday, but I still was able to put the ball on the green and somebody just told me I made 240 feet of putts the last two days,” said Detry, who earned his PGA Tour card by tying for fourth in the Albertsons Boise Open on the Korn Ferry Tour in August and then  tied for 12th in the Fortinet Championship. “I’m going to the driving range to hit a few right now.

“I played for years at the University of Illinois and we played on some PGA Tour caliber courses, then I played on the Challenge Tour and four or five years on the DP World Tour, and then the Korn Ferry Tour. I did what I needed to do to get here.”

Sepp Straka of Austria collected five birdies on the back nine in a 66 and is one stroke behind in solo third, while Garrick Higgo of South Africa had four birdies on each nine in another 66 and is two shots back in a tie for fourth with Scott Stallings, who posted a bogey-free 67, and Mark Hubbard, who made four birdies against a lone bogey on the second hole in a 69.

Davis Riley, the first-round co-leader at 66, followed that with a 71 and is three down in a tie for seventh with Nick Hardy, who recorded a bogey-free 67, and Stephan Jaeger of Germany, who made four straight birdies on the back nine in a 68.

Emiliano Grillo of Argentina shot a bogey-free 65 and is four strokes back in a big tie for 10th with Ben Griffin, who carded a bogey-free 66; Kevin Streelman, who had seven birdies in a 67; Kyle Westmoreland, sank a 14-foot eagle putt at No. 11 in another 67; Dean Burmester of South Africa, who holed out from 54 feet for an eagle on the 11th hole in a 68; Brandon Wu of Danville and Stanford, who made three straight birdies on the back nine in a second 69; Nick Taylor of Canada, who had five birdies on the back nine in a 70, and Trevor Cone, who birdied No. 5 and added 17 pars in a 71.

Defending champion Sam Burns had four birdies on his back nine in a 69 and is tied for 19th, while Will Gordon, who shared the first-round lead with Riley at 66, struggled to a 76 that included a triple-bogey 7 on the 12th hole, and is tied for 60th.