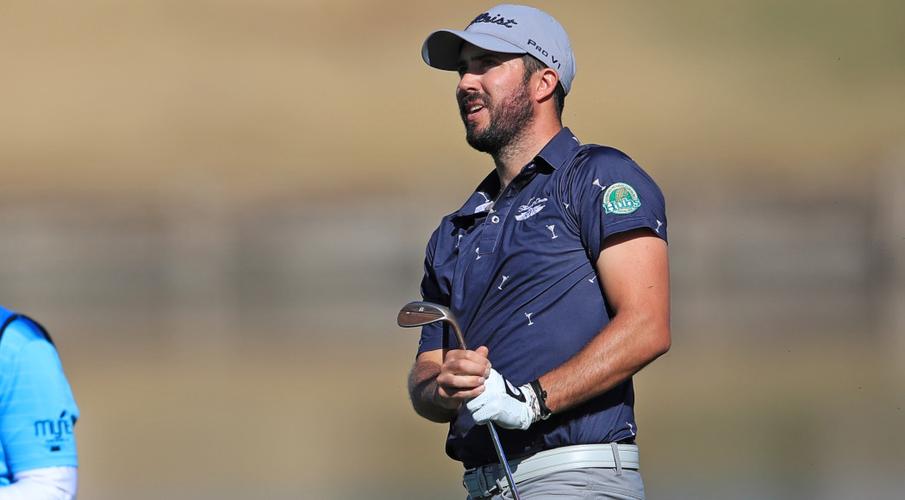 Mark Hubbard didn’t even know he had posted his career-low round.

The 31-year-old Hubbard shot a bogey-free, 8-under-par 63 and is tied for the lead with Matthew NeSmith after one round of the Waste Management Phoenix Open at TPC Scottsdale in Scottsdale, Ariz.

“Really, that’s nice to know,” Hubbard said when told about his new low. “You knew scores were going to be low and I did a good job of taking advantage of the score-able holes. The course is a little softer than it usually is. I struggled a bit with my driver, but figured something out on the 13th and 14th holes.

“We haven’t had fans anywhere (because of the Coronavirus pandemic), so it was great to have some out there. I love this tournament. It was a good day, although it’s a long four days, but I like where I am.”

Hubbard, who played college golf at San Jose State, collected three birdies on the front nine and added five on the last six holes, sinking a 20-footer at No. 18 to tie for the lead.

NeSmith, who like Hubbard has never won on the PGA Tour, holed a 95-foot bunker shot for an eagle on the 13th hole and added six birdies in his own bogey-free 63. In the famed stadium-like setting at No. 16, he hit an 8-iron shot to within six inches, but the limited crowd there wasn’t as rowdy as it usually is.

“I probably made the quietest almost hole-in-one ever on 16,” said NeSmith, who equaled his career-low round after getting a short-game lesson on Monday. “It’s just been like we’re all kind of playing together at home or something like that. It’s really nice to feel a little bit of the nerves and get some claps.

“ … I don’t know what’s going on the last couple of days (after the lesson), but I’m very grateful for it. I just kind of did everything that you’re supposed to. Drive it in the fairway, hit the greens, try to make as many putts as possible and got lucky making a few short game shots in there, as well.”

Nate Lashley, who lives in Scottsdale, made a 12-foot putt while finishing at No. 9 for the last of his seven birdies in a flawless 64 and is tied for third with Sam Burns, who collected nine birdies to go along with two bogeys.

Second-ranked Jon Rahm of Spain is tied for 21st at 68, third-ranked Justin Thomas shot 70 and is a tie for 50th that includes sixth-ranked Rory McIlroy of Northern Ireland, while defending champion Webb Simpson, ranked ninth in the world, struggled to a 73 and is tied for 108th.