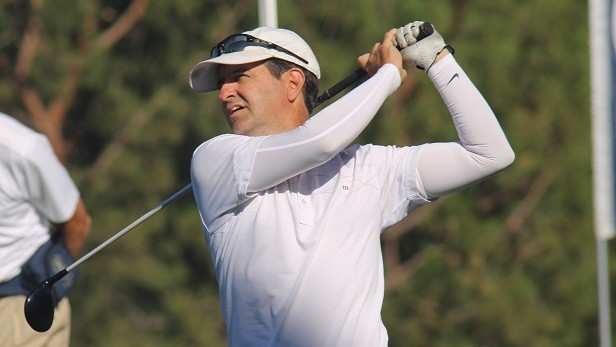 Tim Hogarth of Northridge captured the Kelly Cup for the ninth time, and third in a row, by three strokes over Tyler Crawford of Indio at Lakeside Golf Club in Burbank.

The 49-year-old Hogarth, the 1996 U.S. Amateur Public Links champion who also has won the Los Angeles City Championship eight times and the SCGA Mid-Amateur six times, posted a score of 74-70-70–214, 4-over par on the challenging Lakeside course.

Crawford, who plays out of Plantation Golf Club, closed with a 67 that was the low score of the tournament for a total of 217, while Robert Funk of Canyon Lake finished with a 68 to wind up five shots back in a tie for third with Mike Rowley of San Luis Obispo Country Club at 219.

Mike Turner of El Caballero Country Club totaled 220 and tied for fifth with Dan Sullivan of Brookside Golf Course, while Craig Steinberg of North Ranch Country Club wound up at 221 to tie for seventh with Bobby Schaeffer of Plantation Golf Club.

Ryan Dwight of Dove Canyon was ninth at 222, while Bill O’Connor of Oakland Hills Country Club totaled 223 to tie for 10th with D.J.Fernando of Bakersfield Country Club.