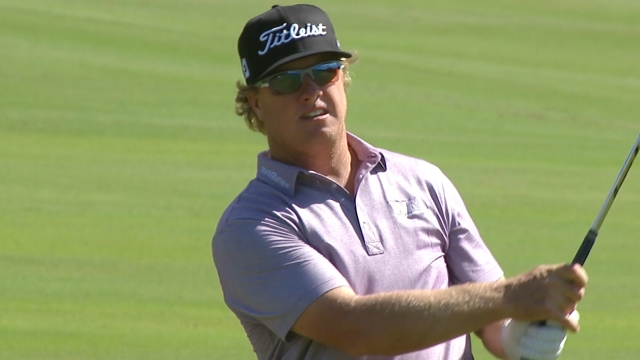 Charley Hoffman has scored better each day in the RBC Canadian Open and if he does it again on Sunday, he figures to claim his fifth PGA Tour victory.

The 40-year-old Hoffman, from Poway and UNLV, shot 7-under-par 65 on Saturday to take a one-stroke lead over Kevin Chappell after three rounds at Glen Abbey Golf Club in Oakville, Ontario.

“I just have a lot of confidence right now, especially with my putting the last half of the season,” said Hoffman, who tied for 20th in the Open Championship last week after finishing eighth in the U.S. Open last month. “I’m playing well and looking forward to the WGC event next week and the PGA.

“I need some high finishes and maybe a win to make the Presidents Cup and move up in the FedExCup standings. I know that making pars on Sunday won’t be enough so I need to keep making putts, make some more birdies.”

Chappell, the former UCLA All-American from Fresno, who was tied for the lead with Hoffman before making a bogey on the final hole for a 66, made eight birdies — including six on the last nine holes on the front side.

“It’s OK because I still have a chance to win the tournament,” said Chappell, who claimed his only PGA Tour victory earlier this year in the Valero Texas Open. “I wasn’t sure I was going to be here this week, but I didn’t like the way I was playing and we have some big tournaments coming up.

“Charley was playing right in front of me so I could see what he was doing all day and I was just trying to keep up with him. It was a good day, but they don’t pay on Saturday, so I have to keep doing what I have been doing. It will be fun playing with Charley (in the final twosome) because we are friends.”

Robert Garrigus, whose only PGA Tour victory came in the 2010 Children’s Miracle Network Classic, made eagle putts of 23 feet on the second hole and four feet on the 16th on his way to a 62, and is two shots back in a tie for third with Gary Woodland, who followed Friday’s 63 with a 68.

Andres Gonzales and Tony Finau posted 66s and are another stroke behind in a tie for fifth with defending champion Jhonattan Vegas (67) of Venezuela, Sam Saunders (67), Ryan Ruffels (68) and Brandon Hagy (69).

Top-ranked Dustin Johnson shot 68 and is five down in a tie for 14th, while Matt Kuchar, who finished second behind Jordan Spieth in the Open Championship last week, totaled 70 and is tied for 41st. Bubba Watson is tied for 55th after a 71.