Haag Tops Hogarth by 1 in Cal Senior Am 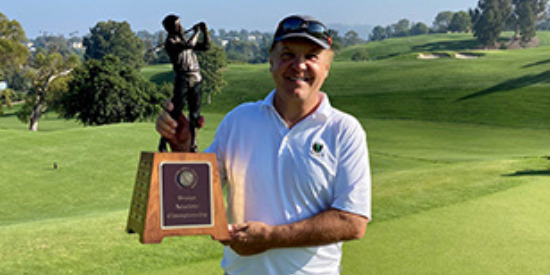 Randy Haag of Orinda and Tim Hogarth of Northridge have gone head-to-head many times over the years, and this time Haag came out on top.

The 62-year-old Haag, who has won more than 100 amateur tournaments over the years and is a six-time Northern California Golf Association Player of the year, matched Hogarth’s five-foot birdie putt on the last hole to win the 30th California Senior Amateur Championship by one strokes at Hillcrest Country Club in Los Angeles.

“We’ve have had many battles, Tim and I, over the years,” said Haag, who also won the Southern California Senior Amateur and the Moot Thomas Invitational this year. “You play your whole life for these special moments to be able to perform when it counts most.

“I sometimes don’t like to know where I stand but, in that case, I knew that I was then tied with (Hogarth). This is a dream for me. Golf is pretty much my life and I get to play great venues like this and hang out with my friends. To win a tournament that is a state title, it really is a dream come true for me.

“This venue was really well suited for my game. It seems like Southern California has been really good to me in the two events I’ve played down here this year.”

Haag, a member of the NCGA Hall of Fame, finished with a score of 70-70-70—210, while Hogarth, who won the Los Angeles City Championship this year and the Pasadena City Championship the last two years among many other amateur titles, wound up at 70-73-68—211.