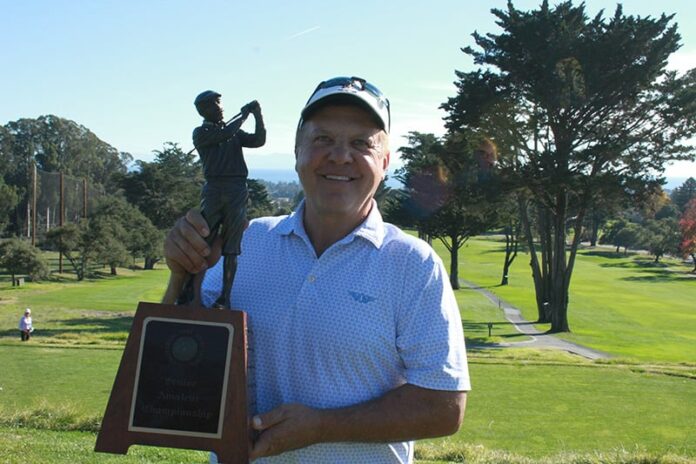 The 63-year-old Haag, who has won more than 100 tournaments in his brilliant amateur career, repeated as champion in the 31st California Senior Amateur Championship, holding on to win by one stroke over Tim Hogarth of Simi Valley and Scott Almquist of Trabuco Canyon despite making a bogey on the last hole Pasatiempo Golf Club Santa Cruz.

“Last year’s win and this year’s win are so different,” said Haag, who plays out of the Olympic Club in San Francisco and has been named Northern California Golf Association Player of the Year six times. “Last year was special because it was my first State title. To do it back-to-back, it’s hard for me to believe.

“On 18, I couldn’t figure out what club to hit. Out on this course, there are so many times that you find yourself trying to two-putt from 15-to-20 feet. That 18th green aged me three years there at the end.”

Haag’s birdie putt on the 18th rolled well past the cup and went down into a collection area. Then, he hit his next shot to within a few feet of the hole and made a clutch bogey putt to pull out the victory.

Hogarth made it close by making a birdie on the final hole, after going bogey-bogey-double bogey on the previous three holes.

“I made a bad swing, and then I ripped my third past the cup (on No. 17),” said Hogarth, who also lost by one shot to Haag in this tournament last year. “Sooner or later, a lack of knowing what you are doing is going to catch up to you. In hindsight, I should’ve just played for a bogey.”

In the North/South Challenge, which pits three of the NCGA’s best players against the Sothern California Golf Association’s best, the NCGA rolled to a 281-292 victory. Representing the NCGA were Haag, Wilson and Morgan. The SCGA was represented by Hogarth, Jim Plotkin and Jeff Burda.