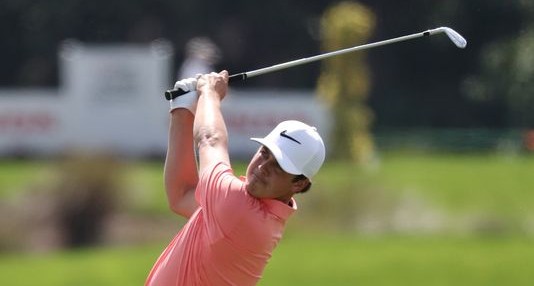 Cody Gribble captured the Sanderson Farms Classic in October, two events into his first season as a PGA Tour member, but missed the cut in his last four tournaments.

After working diligently with his coach the last few weeks, Gribble (pictured) shot 6-under-par 64 to share the first-round lead with another rookie, Wesley Bryan, in the Honda Classic on the Champion Course at PGA National in Palm Beach Gardens, Fla.

“We both know exactly how we want the ball to come out,” said Gribble, whose coach had to be pleased that he hit all 18 greens in regulation. “We want less curve. I tend to draw it too much. I know we wanted more a cut swing. … It clicked today, but it could be lost again tomorrow. You never know. It was a great start, and hopefully I can build on it.

“This is one of the (courses) I like to play. I played it well in Q-school a couple years ago. I’ve got some good memories.”

Bryan, who tied for fourth in the Genesis Open at Riviera last week, and Gribble, who played alongside Jordan Spieth on Texas’ NCAA Championship team in 2012, both collected seven birdies and a single bogey.

Said Bryan: “(I’m) just kind of picking up where I left off (at Riviera). I was able to get the ball in the fairway with some of the tougher driving holes out there, and set up a couple good birdie opportunities.

“It’s my first run at all these tournaments out here. I love this place, love this golf course. … We’re off to a good start here, so hopefully we’ll have another crack at winning).”

Two-time major champion Martin Kaymer of Germany, playing his first event in the United States this season, birdied the last two holes in a 65 and was tied for third with Anirban Lahiri of India, who sank a 25-foot eagle putt on the final hole.

Rickie Fowler of Murrieta collected three birdies on the back nine to shoot 66 and tie for fifth with Ian Poulter of England, Ben Crane, Graham DeLaet of Canada, Sean O’Hair, C.T. Pan of Taiwan and Ryan Palmer.

Scott Stallings made a hole in one from 179 yards on the 15th hole in a 67 and was tied for 12th, while defending champion Adam Scott of Australia posted a 68 and was in a tie for 24th that included Sergio Garcia of Spain, Zach Johnson and Paul Casey of England.