When planning a golf trip to Hawaii, Kauai often takes a back seat to the more well-known destinations of Oahu, Maui and the Big Island of Hawaii. However, you’d be wise to put Kauai atop your list.

While those other islands boast more than 70 golf courses, Kauai has fewer than 10 over its 562.3 square miles, yet all of them are worth the trip given the quality course conditions, design variety and magnificent views on the most remote of all the Hawaiian Islands.

Its staggering mountains, cliff faces and verdant landscapes are features that give Kauai its designation as the Garden Isle, which is the fourth-largest landmass in the chain. Kauai is the home of scenic to the dramatic Waimea Canyon State Park, which Mark Twain named “The Grand Canyon of the Pacific,” as well as majestic waterfalls, dense jungles, soaring sea cliffs and pristine beaches.

Kauai is the oldest and most lush of the Hawaiian Islands, home to majestic waterfalls, dense jungle, soaring sea cliffs, green peaks, pristine beaches and vibrant rainbows. It’s also home to some great golf, from the sunny South Shore to the cozy North Shore near Hanalei Bay. 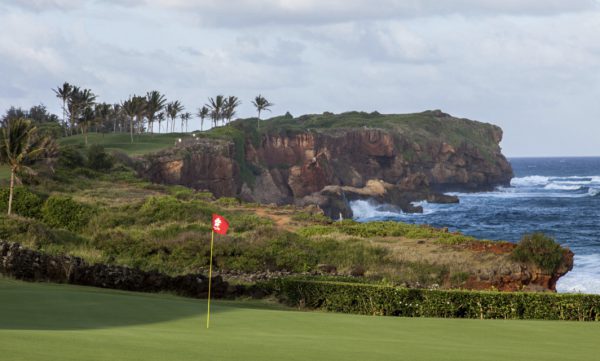 Naturally, the pro tours discovered this golfing paradise, as the PGA Grand Slam of Golf was played at Poipu Bay Golf Course from 1994-2006, with Tiger Woods winning five straight times from 1998-2002 and seven titles overall.

That the PGA would choose Poipu Bay as the site of its event which matches the winners of the four majors each year speaks to the quality of the layout.

Designed by Robert Trent Jones Jr., Poipu Bay is located on the south end of the island, which is drier than the rest of Kauai. With Mount Ha’upu as a backdrop, the links-style course plays on a plateau above the crystal blue waters of the Pacific Ocean through 210 acres lined by colorfully landscaped tropical flowers and plants.

Perhaps the most memorable hole is No. 16, a challenging par-4 that measures 472 yards from an elevated tee box to a fairway that doglegs to the left on the way to an elevated green. An ancient rock wall borders the fairway on the left.

Several holes at Poipu offer birds-eye views of turtles swimming in the rocky bays below, along with many other holes with views of the deep blue sea.

Poipu Bay Golf Club is located next to the one of three luxurious, world-class beachfront resorts on the island, the Grand Hyatt Kauai Resort and Spa, set along the beautiful white sands of in Poipu Beach-Koloa. The largest resort on Kauai with 604 rooms, it is built into a hillside on 50 beachside acres overlooking the Keoneloa Bay.

The Grand Hyatt is home to Tidepools Restaurant, a quintessential Hawaiian design with open windows perched above a tropical lagoon of lively fish. Blended with the Anara Spa’s outdoor lava rock showers, customized body treatments and coco-mango products, couples routinely call this resort the most relaxing on the South Shore.

Traveling to the more serene north shore of Kauai, you will find Princeville Makai Golf Club, located adjacent to Princeville Resort and Spa, which is located on the Pu’u Poa Ridge, which meanders down to the beach overlooking iconic at Hanalei Bay.

As for the golf at Princeville, Robert Trent Jones Jr.’s selected the idyllic setting for his first- ever solo design. was in this idyllic spot.

Since undergoing an extensive $6 million renovation overseen by Jones himself and completed early in 2010, the Makai Course has been rated among the a Top 100 Greatest Public Golf Courses in America (Golf Digest 2015/2016), ranked No. 3 in the state of Hawaii by GolfWeek, and named one of to the list of America’s “Top 5 Great Golf Settings” by National Geographic Traveler.

Princeville Makai appropriately offers guests the golfer immaculate course conditions and six magnificent oceanfront holes. It’s no wonder that the original course in this picturesque setting hosted the Women’s Kemper Open on the LPGA Tour from 1986-90.

The names of the winners say all you need to know of the legitimacy of the Makai Course, as Juli Inkster won in 1986, followed by Jane Geddes the next season, Betsy King in 1988 and 1989, and Beth Daniel in the final year.

Makai translates to “toward the sea” and the courses boast six holes atop seaside cliffs, several of which also have views of iconic Hanalei Bay.

Jack Nicklaus, the greatest golfer of all-time, made his way to the Kauai Marriott Resort and Beach Club in Lihue to and designed the Kiele and Mokihana courses at the former Kauai Lagoons, creating 36 holes of challenging golf on dramatic seaside cliffs in a picturesque oceanfront setting.

These days, only 18 attractive holes remain after the 2016 a sale from Marriott to Timbers Resorts, and a subsequent renovation.

Now known as the Ocean Course at Hokuala, this Nicklaus design proudly boasts has the longest contiguous stretch of oceanfront holes of any course in the Hawaiian Islands.

The course is conveniently located next to Kauai’s main airport in Lihue and the back nine features a memorable stretch of holes near the runway, Ninini Point Lighthouse and Nawiliwili Bay.

In fact, Hokuala was just named “Hawaii’s Best Golf Course” for the second consecutive year by the World Golf Awards.

The Ocean Course winds through mango and guava groves to dramatic seaside cliffs and exceptional ocean views. MSN Travel has called the Ocean Course one of the world’s 12 most beautiful courses.

The Jack Nicklaus Signature Design course, built for tournament play by Nicklaus, meanders along a plateau above the pounding surf. The signature hole is the 330-yard, par-4 16th hole, a short but challenging test for even the best golfers.

With its green situated on a peninsula that plays into the sea bordered on the left by steep cliffs and a small lighthouse, this spectacular panoramic setting offers scenic views of the now-extinct Mt. Waialeale volcano.

Not only does No. 16 present a test with its green situated on a peninsula that plays into the sea, it is located in a spectacular panoramic setting, with the ocean bordering on left along steep cliffs, with a small lighthouse adjacent to the green.

Also in the works as part of the course upgrade, are a new clubhouse on the inland waterway overlooking the ninth hole and a world-class practice facility.

The adjourning Timbers Kauai Ocean Club & Residences features 47 two-, three- and four-bedroom units, which are wholly and fractionally owned. However, visitors can also stay-and-play in these high-end rental units from $1,500 to $6,500 per night.

Opulent amenities include golf, infinity pools, farm-to-table oceanfront dining at Hualani’s Restaurant and more. In the coming years, new townhomes and a 260-room boutique hotel will be built next door.

Robert Trent Jones Jr. also designed Kiahuna Golf Club in Koloa, which opened in 1984. The course, located near the southern tip of Kauai a mile north of the shore, is not as lavish as the resort courses but is not as expensive either, and still is an enjoyable experience.

Kiahuna has only limited views of the Pacific, but mostly plays to a background of the mountains and the lush Kauai landscape.

The back nine is considered the better side of the course, with water coming into play in several spots on a number of well-designed holes. The terrain is relatively flat with gentle undulations, which make the course a nice stroll for those who would rather not take a cart.

Trees frame the fairways, but are spaced sufficiently so that golfers who hit into them often have a shot around or over the top to get their ball back into play.

Also in Lihue, Puakea Golf Course is managed by Billy Casper Golf and was designed by Robin Nelson, “The Dean of Hawaii Golf Architects.” It opened as a nine-hole course in the 1990s, this layout sits on 200 historic acres that was formallyonce were the site of a sugar cane plantation.

In 1997, it was selected among the “Top 10 Nine-Hole Facilities in the U.S.” by Sports Illustrated, which wrote that Puakea … “is too spectacular to keep off our list…dramatic in the extreme, the course offers fabulous views of the Pacific and is built amid volcanic cliffs, massive ravines, giant sinkholes and lush tropical undergrowth.”

Now owned by AOL Co-Founder Steve Case (who grew up nearby),In 2003, Puakea was lengthened in 2003 to 18 holes with a new practice range, putting green and spacious short-game area.

In 2018, the Kauai Visitors Bureau celebrated the 25th anniversary of “Jurassic Park” being filmed on the island. Puakea’s land served as the backdrop to many iconic scenes.

This imagery comes alive on holes 11 through 17, as the imposing Mt. Ha’upu rises up behind them. For a uniquely different experience from Kauai’s resort courses, put Puakea on your list. It was rated seventh-best in Golfweek’s Best in Hawaii in 2008.

Tom Weiskopf, who captured the 1973 Open Championship at Royal Troon, designed the challenging 18-hole private/resort course at Kukui’ula Golf Course in Koloa, which Golf Digest has called “One of the Best Courses in Hawaii.”

Weiskopf, who has created more than 50 courses around the world, designed the 5,758-yard, par-72 course that opened in 2011 to suit players of all abilities.

The challenging 14th hole, described by members as “a quintessential Weiskopf par 4,” has become legendary for its quality in addition to its dramatic ocean views, occasionally populated by spinner dolphins and humpback whales off the south coast of Kauai. 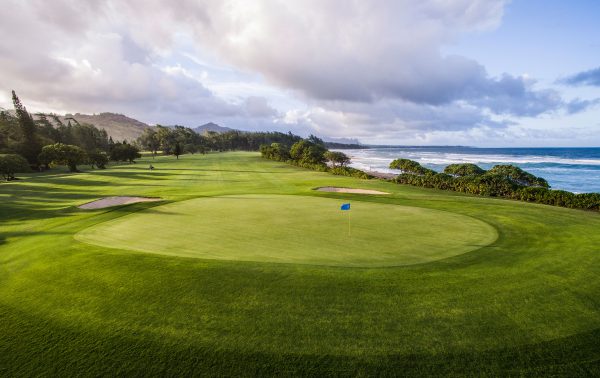 Last but certainly not least, Wailua Municipal Golf Course was designed by Hawaii Golf Hall of Fame Member Toyo Shirai as a nine-hole course in the 1930s, then expanded to 18 holes in 1961.

Wailua is located three miles north of Lihue Airport on Highway 56. and was built as a nine-hole golf course in the 1930 before nine holes were added in 1961.

This high-quality muni course has hosted three USGA Amateur Public Links Championships, was named “One of Hawaii’s Best 15 Courses” by Golfweek, was voted by Golf Digest as one of Hawaii’s best 15 courses, and was also was ranked as the “No. 3 Course in Hawaii” by Golf Channel.

Visitors can play one of America’s best muni’s for only $48 during the week and $60 on weekends. With a practice range facing the ocean, holes on both nines running parallel to the Pacific and lush vegetation bordering each hole, golfers will have difficulty finding a better layout for a better price anywhere.

The nine-hole Kukuiolono Golf Course in Kalaheo is a semi-private golf course that opened in 1928. The layout also was designed by Toya Shirai and measures 2,981 yards from the longest of two sets of tees and has a slope rating of 113, plus a 70 USGA rating.

The climate on Kauai is ideal, with temperatures usually ranging from the mid-70s to mid-80s. The rainfall that makes this the Emerald Isle generally comes late in the evening or early morning, and is limited mostly to the mountains.

Kauai’s climate is ideal year-round, with temperatures usually in the mid-70s to 80s. The rainfall that makes this the Garden Isle generally comes late evenings or early mornings and is predominantly near the mountains. The island’s northeast trade winds create a consistent, refreshing breeze while playing golf.

The northeast trade winds make a round of golf on Kauai a refreshing breeze.

More visitors from California visit The Aloha State than any other. With Kapalua’s famed Plantation Course on Maui closing for most of 2019 and airlines servicing non-stop flights from four California cities to Kauai (SAN, LAX, SFO, OAK), a golf trip to the Garden Isle should be included with your new year’s resolutions.