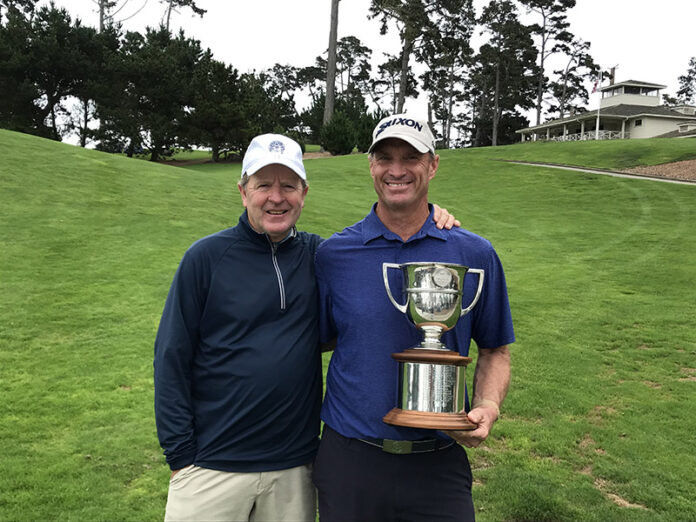 “I’m proud to get the match play title on top of the Senior and Cal Am Senior titles,” said Funk, an NCGA member through AmateurGolf.com. “Casey’s a great competitor and player. I had to play well to win today, and I played well all week.

“This week was probably the best I’ve played since winning the Cal Senior last year.”

“It was all putting,” said Boyns, who was trying to extend his record of total NCGA titles to 26. “The other days, the putts fell in. When you’re playing good, you’re making putts.”

On the par-3 fifth hole, Funk holed out chip shot for birdie, which led Boyns, who had an even tougher lie, to say: “Well, thanks for relieving the pressure.” Boyns would also pitch for birdie to tie the hole.

In the semifinals, Funk, claimed a 4-and-3 victory over Tony Ralph of Sunnyvale, while Boyns, 65, rallied to defeat Mark Morgan of Shingle Springs, the reigning NCGA Senior Player of the Year, 1 up, by winning the last two holes.

Frank Pieper of Carmel captured the NCGA Super Senior Match Play title with a 4-and-3 victory over Rich Cleghorn of Santa Cruz.

Earlier this year, Pieper and Cleghorn teamed up to win the NCGA Super Senior Four-Ball Championship.