Fancy Some Snowbird Golf in Europe? 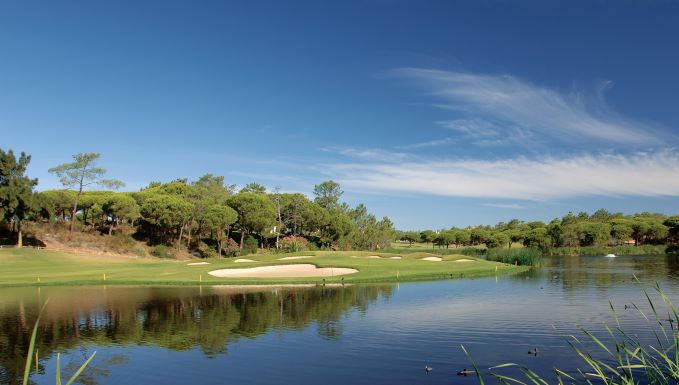 The Portuguese were once the world’s most important seafarers and their influence stretches far and wide. Tempura, now a favourite Japanese dish was brought to Japan by the Portuguese. It produces half of the world’s cork and is the oldest country in Europe. Its capital Lisbon is said to be four centuries older than Rome and also has one of the oldest universities in the world in Coimbra. Back in 1494, it owned half of the ‘New World’. Hannibal’s elephants were landed in Portimao before crossing the Alps. There’s definitely no lack of history in Portugal.

There’s also no lack of sunshine golf and it all started in the mid 60’s. The game of golf started in Portugal in the late 19th century with the Brits playing the game while producing Port wine and the Oporto Golf Club was founded in 1890 and one of the first courses on the European continent.

The southern most point of Portugal is situated in the Algarve and it became a holiday hotspot because of its warm (but not too warm) summers and mild and sometimes wet winters, ideal conditions to keep the area green and lush. With 200 kilometres of golden beaches, no wonder tourists far and wide flock to the popular region.

These are also ideal conditions for golf courses and there are plenty of them.

SIR HENRY COTTON – Penina, the home of golf in the Algarve.

Sir Henry Cotton was a larger than life character driving around in a Rolls Royce and occupying a suite in the 5* Penina Hotel following his retirement from professional golf.  A winner of three Open Championships and many other golf tournaments, notably the French, Belgian, Czechoslovak, Italian, German and other Opens during his 30 year career, Henry Cotton’s career really got going after taking up the post of Head Professional at the Royal Waterloo Golf Club in Belgium where he really found his game and became one of Britain’s best golfers.  He married Isabel-Maria Estanguet de Moss, the flamboyant daughter of an Argentinean beef merchant who influenced Cotton’s image and dress sense. Following his retirement, he became a renowned golf architect with the Penina Championship Golf Course as one of his main designs which then signalled the start of golf in the Algarve.

Tourism in Portugal was synonym with Lisbon, Cascais and Estoril and it was the playground of the rich and famous escaping the cold and damp northern winters. The potential of the Algarve was still to be discovered. That changed in the mid 60’s when the idea of a golf resort was formed in the minds of some local entrepreneurs. The Algarve then was still unspoilt with long, largely empty beaches and small guesthouses but Penina would change all that. They assembled the best team in the business to design a 5* property and golf course on the ‘paddy fields’ below the site of the hotel. Henry Cotton saw the potential and designed the routing but also planted thousands of trees and shrubs to frame the traditional layout.

Penina ***** was and remains the benchmark for luxury golf holidays in the Algarve.

For a Par of 73, the close to 7,000 yard and relatively tight Henry Cotton Championship Course is no pushover. Although the start is gentle enough, the course shows its teeth on the back 9. The unusual combination of double Par 5’s to start and finish the back 9 results in a Par 35 – 37 combo.

There is water and it’s notoriously in play on holes 2, 5 and 7 and then again on 12 and 13. There are drains playing havoc with your drives and many of the 2nd shots on Par 5’s. Most greens are elevated and sloped, catch a bit of spin and you’ll find yourself at the bottom of the slope.

Given that Cotton planted thousands of trees, you’ll be guided from most tees but don’t wander astray as you’ll find it hard to reach the greens.

The stand-out hole for me is the 12th, a long straight Par 4 where only a straight drive will give you access to a water fronted green.

Opened in 1968, the hotel was named after Philippa of Lancaster, whose marriage to John I of Portugal cemented the 700 year old Anglo-Portuguese Alliance.

Situated in Vale do Lobo and on the edge of one of Europe’s finest golden beaches, the Dona Filipa Hotel recently underwent a major refurbishment and can now once again hold firm amongst Algarve’s finest.

The hotel provides 154 rooms of various types and several restaurants and bars. A short walk gives you access to the ‘Praca’ with abundant nightlife.

It also has one of the Algarve’s only outdoor heated swimming pools for year round swimming which gives it an all year appeal.

Pines, Corks and Olives … all local produce and the three loops of 9 all blend seamlessly in the local landscape. My favourite combo is Pines / Corks which gives you undulation, elevation, water and trees.

This course can show its teeth and has probably the longest Par 5 I’ve ever played. The 8th of the Corks is a 527 meter par 5, not stupidly long but however it’s presented, it seems to go on forever. For the most part uphill, with a green wedged on top of a crest and framed by luxury villas, it will be a hard par for anyone.

There are gentler holes on this combination and lots of scoring opportunities but the greens are generally massive so getting on it is one thing, walking off with pars is another. I enjoyed it and it was in good condition coming out of a long dry year.

SAN LORENZO – ONE OF EUROPE’S FINEST

One of my personal favourite golf courses anywhere and it always entices me to play well.  Constructed in a figure of 8 around the modest club house, holes 5 to 8 are amongst the most scenic in golf. There are only a few ‘easy’ holes on San Lorenzo but the combination of holes 5 to 8 is a joy to play.  The only thing I would say is they come too early in the round as everything after that seems just that little bit less spectacular. Don’t get me wrong, every hole that follows is a gem and needs to be played with care and precision and the final two are possible card wreckers.

When in top condition, San Lorenzo can rival the best in the world and it’s the one I always return to whenever I have the chance.

Penina, Pinheiros Altos and San Lorenzo together with Penina and Dona Filipa Hotel are part of the JJW Hotel & Resort Group who recently have announced a 42 million investment in the Algarve and have teamed up with Intercontinental Hotel Group to elevate the group’s standing in world tourism.

Portugal has 3 major airports and Lisbon connects to Faro from many US cities. Driving to Faro takes around 2hr30 and flying 30 min. From Faro, you’re within an hour of most golf courses. This is golf on the Atlantic Ocean which keeps temperatures from getting uncomfortable although the summer can be hot.

The Algarve’s cuisine is fish based, freshly caught and delivered straight to the restaurant, there is abundant choice of fish and seafood.

And then there is the wine. Portugal is a major producer of wine and most of it is drunk by the locals. The main wine region, the Douro Valley in the North is a Unesco heritage site but the whole country provides plenty of choice and at very reasonable prices.

There are around 30 courses in the Algarve, many of whom have hosted European Tour events so plenty of choice and as the region from East (border with Spain) to West (the Atlantic Ocean) is around 150 kilometres and serviced by a motorway, all the courses are close to each other.