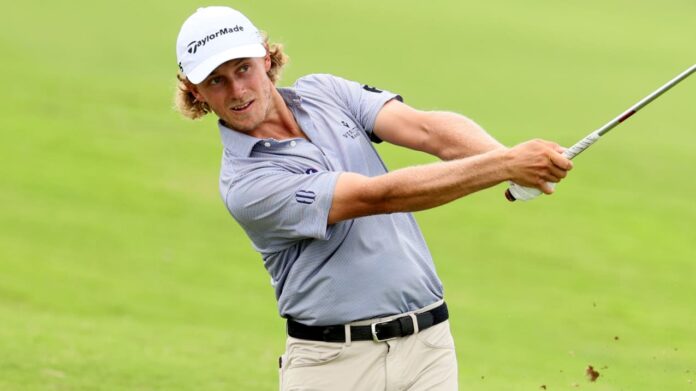 Harrison Endycott of Australia and Austin Smotherman have never won on the PGA Tour, but you couldn’t tell that on Thursday.

Endycott, who bounced back after opening with two bogeys, and Smotherman, who played bogey-free, carded scores of 9-under-par 62 and are tied for the lead after the first round of the Butterfield Bermuda Championship at Port Royal Golf Course in Southampton, Bermuda.

“Fortunately and unfortunately, I’m kind of comfortable in that position being kind of on the bubble,” said Smotherman (pictured), who recently regained his PGA Tour playing card after going back to the Korn Ferry Tour. “I’ve had it kind of throughout my entire career now. I think the best thing for me was … having those extra two weeks off before Napa to just mentally reset, I mean, we’re finishing the year grinding.

“I missed the cut at Wyndham, let that sink in, used that as some motivation coming out. So a good off-season with some time off and some really good work, especially with these last two weeks off not getting into the Zozo Championship or the CJ Cup, so I knew Bermuda was going to be my next start.

“I plan to play these next three tournaments out to finish the Fall season. We’re doing a lot of good things, so just keep doing what we’re doing.”

Smotherman, who won the 2021 Simmons Bank Open on the Korn Ferry Tour and the 2018 Abierto Mexicano de Golf on the LatinoAmerica Tour, collected six birdies on the front nine and then made birdies on three of the last four holes in his flawless 62.

Endycott matched that despite his slow start after opening on the back nine, makings eagles on the 17th and seventh holes in addition to adding four straight birdies after his opening bogeys, and three birdies on the last four holes.

“It was just one of those rounds where, you know, you just get comfortable and you free up and I managed to do a really good job of that today,” said Endycott, whose only pro victory come in the 2022 Huntsville Championship on the Korn Ferry Tour. “I don’t think we’re going to get too many rounds out here on this course with no wind.”

Arjun Atwal of India had nine birdies in a 63 and is in a tie for third with Denny McCarthy, who started and ended the back nine with three straight birdies; Adam Schenk, who made four birdies on each side in a bogey-free round; Scott Brown, who also had four birdies and no bogeys on each nine, and Robby Shelton, who birdied four of the last five holes while finishing another bogey-free round on the front nine.

Brian Gay, 50, who claimed one of his five PGA Tour victories in this tournament in 2019, took a step down from the Champions Tour and is tied for 29th after a bogey-free 66, and John Daly, also a member of the senior circuit, made three birdies coming home on the front nine and to salvage a 71 and is tied for 110th.