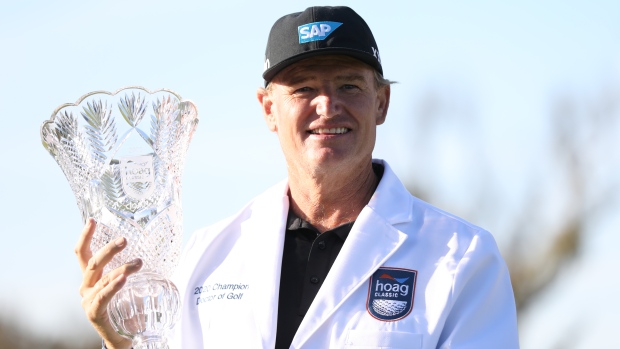 Ernie Els of South Africa has won almost everywhere around the world, so why not on the PGA Tour Champions.

The 50-year-old Els claimed his first victory in is third start on the senior circuit, making birdies on the 15th and 18th holes to beat Fred Couples, Robert Karlsson of Sweden and Glen Day by two strokes in the Hoag Classic at Newport Beach Country Club www.newportbeachcc.com.

“It was pretty tight,” said Els, whose last victory came in the 2013 BMW International Open in Germany. “I felt a little uncomfortable on the greens. I didn’t have that free-flowing feeling. I had to work hard for it and that’s a good thing to do, to work hard for something.

“You don’t want something falling in your lap. I’m glad the first one’s over with and we can move on now and it gets more comfortable after this. … After being in a playoff in Hawaii, coming close to winning there, I didn’t want to mess this one up. I had a great opportunity and I wanted to try and take that.”

Els, who claimed his 72nd pro victory including 19 on the PGA Tour and four majors, carded a score of 66-64-67—197, 16-under-par. He almost landed his first victory on the PGA Tour Champions earlier this year, but lost in a playoff to Miguel Angel Jimenez of Spain in the Mitsubishi Electric Championship at Hualalai.

This time “The Big Easy” made three birdies on the last seven holes to pull out the victory.