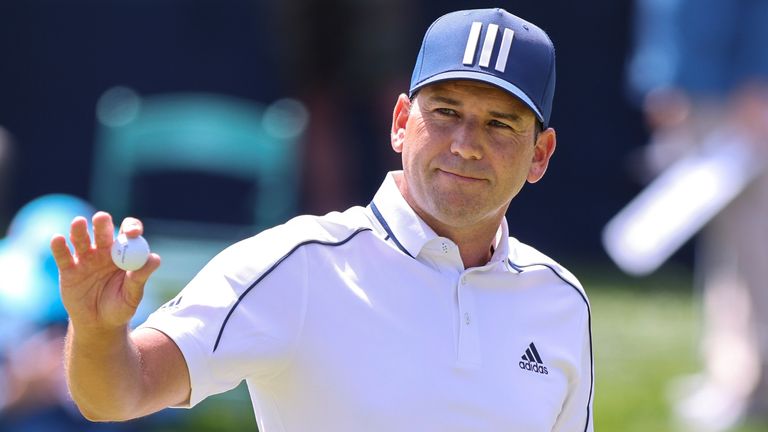 Sergio Garcia of Spain put up a low number early in the day and nobody caught him.

Garcia made two eagles while shooting 7-under-par 65 to take a two-stroke lead over left-hander Brian Harman after one round of the 47th Players Championship at TPC Sawgrass in Ponte Vedra Beach, Fla.

“I thought the course played a little bit easier than the last couple days,” said Garcia, who won the Players in 2008 for one of his 11 PGA Tour victories. “The greens were a little soft, which was a little bit of a surprise, but that they were still fast and that made putting a little tricky.

“I’ve always liked coming here and said that this course and Valderrama are my two favorite courses in the world. I played pretty well most of the way and really well at the end. It’s always nice to make two eagles in the same round.

“It was a solid round with a great finish.”

Garcia, the 2017 Masters champion, started on the back nine sank a nine-foot eagle putt at No. 16 and then closed out his round with 18-footer for eagle at No. 9, mixing in four birdies and a lone bogey at No. 1. He finished birdie-birdie-eagle.

His finish was much better than his start, as Garcia misjudged the time it would take to walk from the practice range to the 10th tee, and jogged into position with about a minute to spare and avoided disqualification.

Harman had three bogeys in the first seven holes, but turned things around and collected eight birdies, including five while playing bogey-free on the back nine in his 67. He made four straight birdies through No. 12.

“You know you’re going to have a stretch like that at some point to where the ball bounces into the wrong spot, you miss a putt, you just barely miss a fairway,” said Harman, who has two PGA Tour victories, the last in the 2017 Wells Fargo Championship. “That’s just part of the rub of this place. It will eat you up if you let it.

“I knew I was playing well. I prepared really well, I played really great in the practice round, so I figured if I could just stay patient, I could turn things around.”

Shane Lowry, the reigning Open champion, was tied for second until carding a bogey on the last hole and finished at 68 to tie for third with Matthew Fitzpatrick of England, who holed out from 76 yards for an eagle on the ninth hole, and Corey Conners of Canada, who sank his approach shot from 176 yards for and eagle at No. 14.

Sixth-ranked Bryson DeChambeau of Clovis, coming off his victory in the Arnold Palmer Invitational, made four birdies on the back nine to shoot 69 and is tied for sixth with Lee Westwood, who was second in the API, Tom Hoge, Denny McCarthy, Rory Sabbatini of Slovakia and Will Zalatoris, who was 3-under through 17 holes when darkness halted play.

Eighth-ranked Patrick Reed posted a 70 and is tied for 12th, while third-ranked Justin Thomas totaled 71 and is in a tie for 26th that includes fourth-ranked Collin Morikawa of La Canada Flintridge and Cal, and 10th-ranked Webb Simpson, the 2018 Players champion.

Second-ranked Jon Rahm of Spain salvaged a 72 with three late birdies and is tied for 42nd, top-ranked Dustin Johnson is tied for 60th at 73, ninth-ranked Patrick Cantlay of Los Alamitos and UCLA carded a 74 and is tied for 85th, while fifth-ranked Xander Schauffele of La Jolla and San Diego State struggled to a 76 and is in a tie for 112th that includes seventh-ranked Tyrrell Hatton of England.

Rory McIlroy of Northern Ireland, who was unable to defend his Players title last year when the tournament was halted after one round because of the Coronavirus pandemic, carded an ugly 79 and is tied for 139th.

There were 33 tee shots hit into the water on the famed par-3, 143-yard 17th hole with its island green.