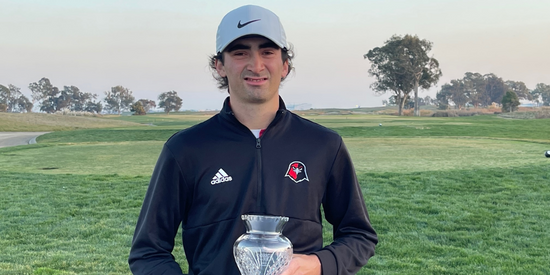 Luke Dugger of Davis finally claimed his first victory of 2022 after finishing in the top 10 on six occasions without claiming the trophy.

Dugger, a senior at Holy Names University in Oakland, made two birdies and an eagle down the stretch to shoot 4-under-par 68 in the final round and beat A.J. Fitzgerald of Salinas by one stroke in the AmateurGolf.Com Winter Invitational on the South Course at Corica Park Golf Club in Alameda.

In the tournament sponsored by Callaway Golf, Dugger holed out from 95 yards for an eagle on the 14th hole before adding birdies at Nos. 15 and 17 to post a score of 70-68—138, winning for the first time since capturing the Peninsula Amateur and the Antioch City Championship in 2021.

Kaylyn Noh of Rocklin, who won the 2022 Big West Conference Women’s Championship for Cal Poly San Luis Obispo, captured the AGC Winter Invitational Women’s Division with a score of 69-68—138, followed by Selena Tang of Fremont at 68-71—139.

Michael Staskus of Los Altos claimed the Senior Division by making a par on the second playoff hole after he and Jeff Weiss both birdied the first extra hole.

Daniel Connolly of San Francisco won the Mid-Amateur Division with a score of 72-68—140, while Marc Engellenner of Rocklin totaled 72-72—144 to tie for second with Nate Jetter of Pleasanton, who wound up at 71-73—144.

The AmateurGolf.com Winter Tour series continues with the Silicon Valley Amateur, which is scheduled for Jan. 7-8 at Baylands Golf Links in Palo Alto.