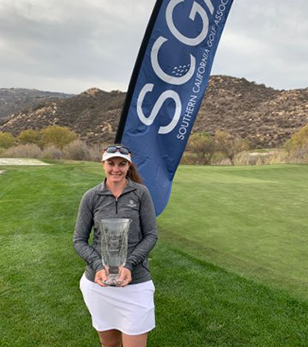 Craig, who played at Pepperdine and is a former assistant coach for the Waves’ women’s golf team, made a birdie on the final hole to finish at 1-under-par 72 and win by seven strokes at Bear Creek Golf Club in Murrieta.

Kathy Kurata of Friendly Hills Country Club, who won this tournament in 2012 and 2017, shot 79 to tie for second with Charlotte Sanders of Old Ranch Country Club, while Corey Weworski of Omni La Costa Resort was fourth at 81.

Hannah Anderson of San Vicente Golf Club totaled 82 to tie for fifth with Taylor Kay of Coto de Caza Golf and Racquet Club, while Glenda Alexander of Recreation Park Golf Course was seventh at 83, followed by Miyuki Inouye of Virginia Country Club at 84.

Padilla won the Men’s title with a birdie on the first playoff hole on the North Course at Coto de Caza Golf and Racquet Club to turn back defending champion Ricky Montanez of Silver Lakes Country Club and Damon Krause of Griffith Park Golf Club in Los Angeles after all three finished at 1-under 71.