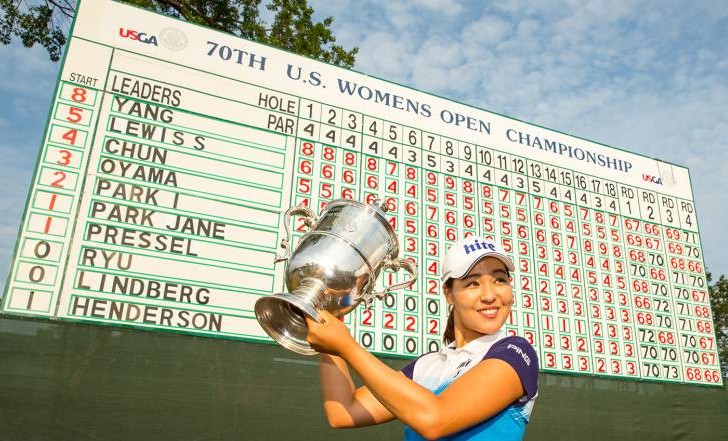 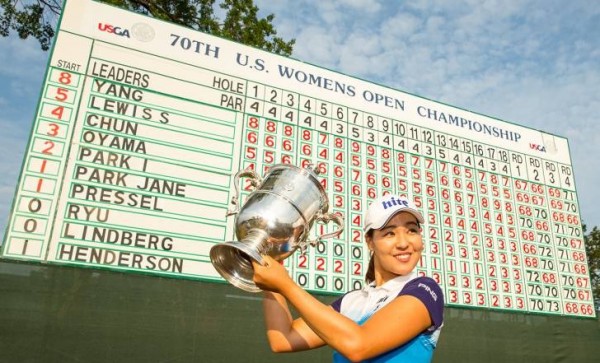 Rookie In Gee Chun of South Korea birdied three of the last four holes to post a 4-under-par 66 and win the 70th U.S. Women’s Open by one stroke over Amy Yang, also of South Korea, at Lancaster Country Club in Lancaster, Pa.

The 20-year-old Chun, playing in only her sixth LPGA Tour event and her second major, recorded seven birdies in her final round and her four-day total of 272 matched the tournament record set by Annika Sorenstam of Sweden in 1996 and Juli Inkster in 1999.

“This year at the beginning of the season I played four tournaments at LPGA,” said Chun, who has won seven times on the Korean LPGA Tour. “I had a great experience from those four tournaments and that has led to three wins in Korea and one major win in Japan.

“And with that, with all those four wins this year, I got a lot of confidence bringing into this tournament. And that’s why I could enjoy every moment of the tournament. … (But) I still don’t realize I won this championship.”

Chun missed a 12-foot par putt on the 18th hole to open the door for Yang, who eagled the 16th hole and birdied the 17th, but missed her par putt from 10 feet on the final hole and closed with a 71 after taking a three-shot lead to the final round.

Top-ranked Inbee Park of South Korea, a six-time major champion, finished with a 67 and wound up three strokes back in a tie for third with third-ranked Stacy Lewis, who struggled to a 70 in search of her third major title.

Morgan Pressel, whose only major crown came in the 2007 Kraft Nabisco Championship, carded a 68 and was two strokes further back in a tie for fifth with 17-year-old Brooke Henderson (66) of Canada, So Yeon Ryu (67) of South Korea, Pernilla Lindberg (67) of Sweden, Jane Park (68) and Shiho Oyama (70) of Japan.