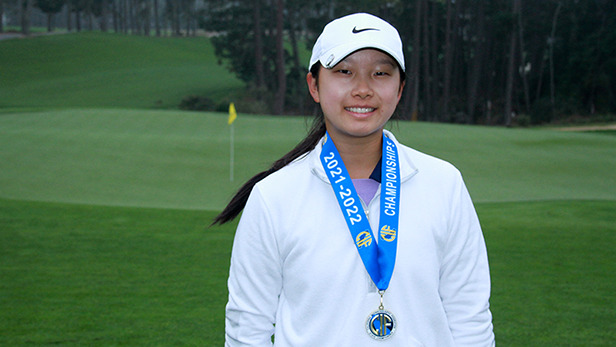 Chien, who also won the 2020 California Women’s Championship at the age of 14, sank a nine-foot birdie putt on the first playoff hole to turn back her friend, Ashley Yun of Walnut High, who recently won the CIF Southern California Regional.

“It feels great to have won it,” said Chien, who claimed 16 titles during her career on the Southern California PGA Junior Tour. “I started my day off slow, but then picked myself up. Then I got on a roll.”

Chien who made only one birdie in her first nine holes after starting at No. 10, birdied four in a row through No. 6 en route to a 3-under-par 68 to tie Yun and force the playoff.

Catherine Rao of Oaks Christian in Westlake Village was third at 69, while Jasmine Leovao of El Camino in Oceanside shot 70 to tie for fourth with Bridget Chantharath of Northwood in Irvine, and Nikki Iniakov of Stevenson in Pebble Beach was sixth at 71.

Granite Bay, which finished fourth three straight years, took the team championship this time with a score of 16-over 371, followed by 2019 champion Palo Alto at 387, Valley Christian of San Jose at 388, Troy of Fullerton at 395, Carlsbad at 400 and Notre Dame of Sherman Oaks at 407.

“They’re better kids than they are golfers,” Granite Bay Coach Jason Sitterud said. “Golf’s an individual sport, but they made it a team sport. It was an impressive season and they were impressive again today.”

Rounding out the scoring for Granite Bay were Lauren Pierce in a tie for 42nd at 83 and Lauren Peterson in a tie for 51st at 91.