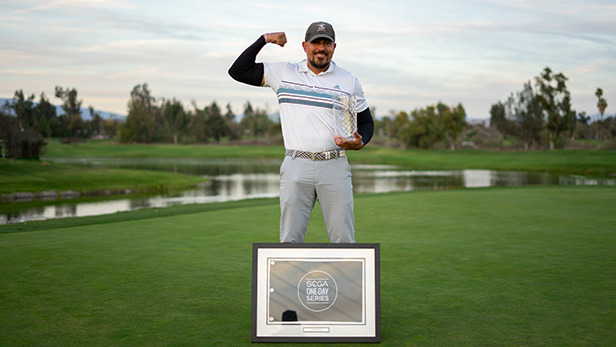 The final match was all square through 11 holes after neither player held a lead of more than 1-up, before Pizano took charge and a 2-up lead by winning three consecutive holes through No. 14.

However, Carter then won the next three holes and after they halved the final hole, he was the winner.

“It means a lot, but I’m super tired,” Carter said, who won a day after the final was delayed by rain. “It was really cold on Monday, and I’m glad we got the break on Tuesday. “I promised my daughter I would take her to Disneyland if I won and I am exhausted, but I’m still going to go.

“Putts weren’t going as far (after the rain). It was really muddy. A lot of chips were digging into the ground and wouldn’t go far, so we made those adjustments. We played the slice all day and it stuck with us. We knew where the shots were going to go. (My caddie) told me to trust the shots and make the putts.”

In the semifinals, Carter turned back the 2019 champion Michael Keane of Bear Creek Golf Club Murrieta, 2 up, and Pizano defeated Al Varga of Simi Hills Golf Course in Simi Valley by 2 and 1.

Pizano beat Jeff Jordan of British and Dominican Golf Club, 4 and 3, defeated Jonny Lee of Mickey Mouse Golf League in Glendale, also by 4 and 3, and Al Varga of Simi Hills Golf Course, 2 and 1 to reach the final.