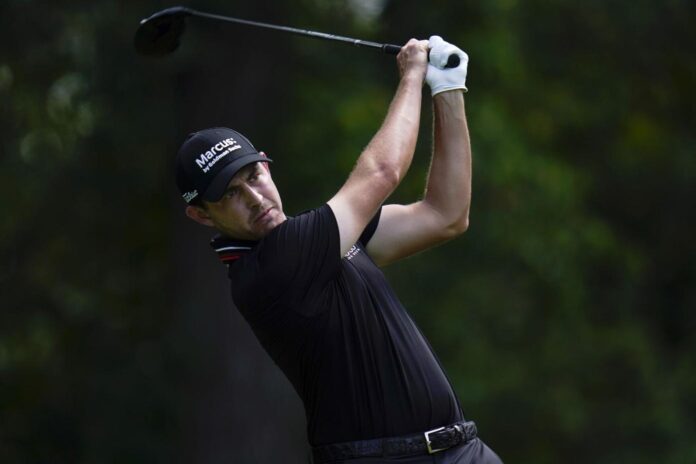 Patrick Cantlay simply turned it on when Bryson DeChambeau faltered.

Cantlay (pictured) came from five strokes down on the back nine and even though he made his lone bogey on the last hole, he shot 6-under-par 66 and is tied for the lead with DeChambeau heading to the final round of the BMW Championship, second event of the FedEx Cup playoffs, at Caves Valley Golf Club in Owings Mills, Md.

“It was a little bit crazy out there and we saw a little bit of everything,” said Cantlay, who has won the Memorial Tournament and the Zozo Championship, and hopes to become the first player with three victories on the PGA Tour this season. “I played pretty well today, all the way around, even though I didn’t putt quite as well as I did the first two days.

“I’m just going to stick to my game plan, stay in my own world and do my own thing, even though it’s a little chaotic out there and the people are really amped up. I just want to do the same things with a chance to win tomorrow.

“It’s been hot and humid all week, so I’m a little bit drained, so I just want to get a good night’s sleep and I’ll be ready to go.”

The 10th-ranked Cantlay, from Los Alamitos and UCLA, sank a 16-foot eagle putt on the second hole, added a birdie at No. 3, made three straight birdies early on the back nine and added one more at No. 16 to finish 54 holes at 21-under 195.

The sixth-ranked DeChambeau, from Clovis in California’s San Joaquin Valley, sank eagle putts of 25 feet on the fourth hole and 53 feet on the fifth, and was five shots ahead after a tap-in birdie at No. 11.

However, he hit his golf ball into the water on the next two holes to make a bogey and double bogey, but salvaged a 67 with two birdies down the stretch and regained a share of the lead after shooting 60 in the second round.

“It was an interesting round and I was playing great,” said DeChambeau, who has won the 2020 U.S. Open and the Arnold Palmer Invitational in this PGA Tour season like none other. “Then I had a little mud on my ball in the fairway on the 12th hole and hit it into the water. Then I hit a great shot at 13, but the wind got it and it went into the water, too. That’s just the way it goes sometimes.

“Making two eagles in a row was a lot of fun, especially the second one. The putt went uphill, then downhill, with a pretty good break and then just happened to go into the hole. That was a little bit of a  bonus.

“I hit my irons well and my putting was good, but I have to drive the ball better tomorrow. There’s nothing else to do except keep trying to hit it good.”

Sungjae Im of South Korea birdied the last two holes for a 66 and is three down in solo third, while two-time FedEx Cup champion Rory McIlroy of Northern Ireland posted a bogey-free 65 and is four strokes back in a tie for fourth with Sam Burns, who birdied three of the last four holes for his own 65, Abraham Ancer of Mexico, who had seven birdies in a 66, and Sergio Garcia of Spain, who carded a second straight 67.

Top-ranked Jon Rahm of Spain, the defending champion who shared the first-round lead with McIlroy and Burns at 64, made bogeys on three of the last six holes in a 70 and is five shots back in eighth, Hudson Swafford birdied the last hole for a 68 and is one more behind in ninth, while second-ranked Dustin Johnson, defending FedEx Cup champ, had a 65 and is seven behind in a tie for 10th with Erik van Rooyen of South Africa, who birdied three of the last four holes in a 67.

Eighth-ranked Brooks Koepka is tied for 16th after a 69, while fifth-ranked Justin Thomas also shot 69 and is in a tie for 26th that includes Masters champion Hideki Matsuyama of Japan, who totaled 72.