Cabrera takes lead with a 66 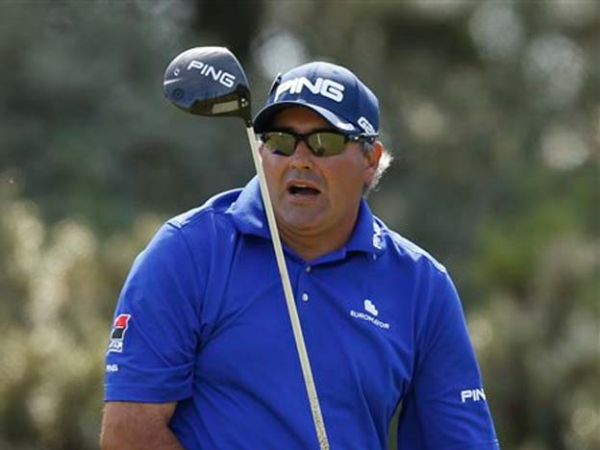 Angel Cabrera of Argentina posted a 6-under-par 66 to take a one-stroke lead over Phil Mickelson and Martin Flores after one round of the Wells Fargo Championship at Quail Hollow Club in Charlotte, N.C.

Cabrera, a two-time major champion, collected seven birdies, including four in a row through the 12th hole, one on a 42-foot putt from the fringe at No. 11.

“I had a really good first round but we have a long way to go,” said Cabrera, who needed only 24 putts. “I played very well on the greens, and I saved myself on the holes that I didn’t play so well. I was lucky.

“I played pretty good from tee to green and made some good putts.”

Mickelson, looking for his first top-10 finish of the season, was tied for the lead with Cabrera until he missed a four-foot put for par on the 17th hole en route to his 67, which included seven birdies.

The 32-year-old Flores, who best finish on the PGA Tour was a tie for fourth in the 2013 John Deere Classic, also was tied for the lead before making a bogey at No. 17, missing an 11-foot par putt on the way to his 67.

Webb Simpson, the 2012 U.S. Open champion who lives in Charlotte and is a member at Quail Hollow, shot a 68 despite a double-bogey 6 at the ninth hole and was tied for fourth with Stewart Cink, the 2009 Open champion, and Shawn Stefani.

Rory McIlroy, who claimed his first PGA Tour victory at Quail Hollow in 2010, had six birdies in a round of 69 and was in a tie for seventh with eight players, including major champions Vijay Singh, Justin Rose of England  and Martin Kaymer of Germany.