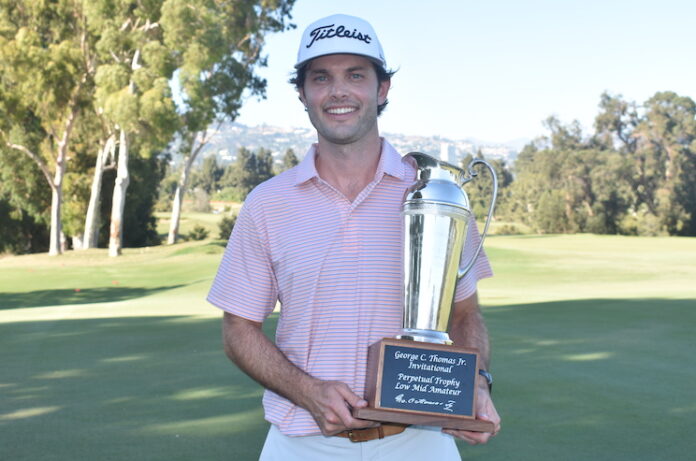 Evan Beck of Virginia Beach, Va., captured the George C. Thomas Invitational Mid-Amateur Championship by four strokes over Michael Jensen of San Francisco in a three-hole aggregate playoff after they were tied through 54 holes of regulation play at The Los Angeles Country Club.

Jeff Wilson of Fairfield captured the Senior title by two strokes over Robert Gerwin II of Cincinnati and Mark Sear of Manhattan Beach.

“It’s been a lot of fun to compete and be in contention a fair amount,” said Beck (pictured), who won the Eastern Amateur, Virginia State Open and Virginia Mid-Amateur last year. “I’ve met a lot of great guys and seen a lot of old friends playing in these tournaments, as well, which has been awesome.

“It’s always nice to win, especially at a historic venue like LACC. The course is spectacular and it’s going to be really cool to see it next June as the U.S. Open venue.”

“I really hadn’t been playing very well since my shoulder surgery (in 2020), when they replaced my entire rotator cuff,” said Wilson, who started playing golf again in the middle of last year. “So to win in a pretty strong field makes me feel pretty good.

“This week, I managed myself pretty well, and I putted pretty well. That’s a good recipe here.”