Thomas on top in Mexico after 66 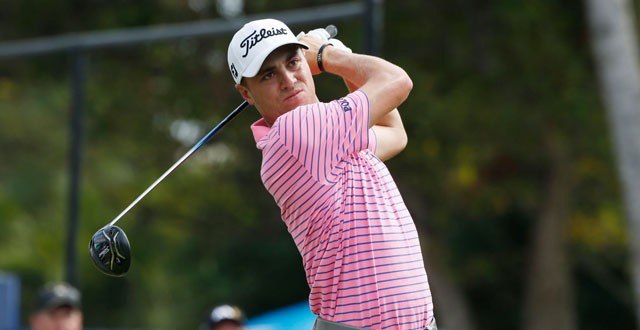 Justin Thomas has won three times this season, but some of the best players in the world weren’t there each time.

That’s not the case this week in the WGC-Mexico Championship and Thomas shot 5-under-par 66 in the third round to take a one-stroke lead over top-ranked Dustin Johnson at Club de Golf Chapultepec in Mexico City.

Thomas, who made a hole in one with a 6-iron on the 14th hole and added five birdies, played the back nine in 31, and was at 12-under 201 through 54 holes after winning the CIMB Classic in Malaysia and sweeping the SBS Championship and Sony Open in Hawaii in the islands to start 2017.

“I hit it and it looked perfect,” Thomas said of his ace. “I said, ‘Go in,’ and it did. You might as well say it. It was really cool. It was the first shot I hit really well today and it was nice to see it go in.

“I didn’t hit the ball that great today, especially early, but I made some good par saves. I feel very comfortable and I’m looking forward to tomorrow.”

Johnson, who won the Genesis Open in his last start, drove the green on the 316-yard first hole and sank a 20-foot birdie putt to kick-start a second straight 66, adding four birdies before making his only bogey on the 16th hole.

Third-ranked Rory McIlroy of Northern Ireland, who can take the top spot from Johnson with a victory this week, finished with seven straight pars in a 71 that left him two shots back in a tie for third with Phil Mickelson.

Lefty scrambled for a 68, holing out from off the green three times and taking only 22 putts on a day in which he often found himself in the trees, but missed a seven-foot par putt on the last hole that dropped him out of a tie for second.

Lee Westwood of England carded a 66 that included five birdies on the back nine and is three strokes behind in a tie for fifth with rookie Jon Rahm of Spain, who made a bogey on the third hole but played the last 15 holes in a flawless 5-under.

Tommy Fleetwood of England made his lone bogey on the first hole in a 66 and was another shot back in a tie for seventh with Thomas Pieters of Belgium and Tyrrell Hatton of England, who both had 68s.

Sixth-ranked Jordan Spieth sank a 23-foot eagle putt on the first hole to on his way to a bogey-free 63 and was five down in a tie for 10th with Matt Kuchar, who totaled 67, J.B. Holmes, who had a 69, and Daniel Berger, who came in at 70.

“I didn’t hit any foul balls today, the way I did the first two days,” said Spieth, who won the AT&T Pebble Beach Pro-Am last month and had the low scored in round three in Mexico. “I got more aggressive, trusted my lines and hit the ball close to the hole.

“I didn’t have to depend so much on my putter and I have to do that again tomorrow.”

Defending champion Adam Scott of Australia played his best golf of the week with a 68, but 16 shots behind in a tie for 53rd.