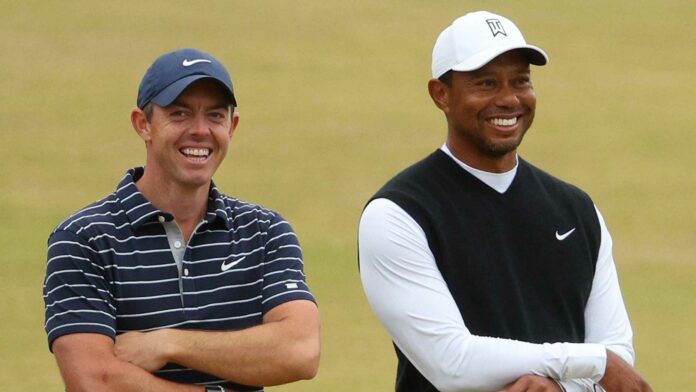 Tiger Woods is ready to play in front of cameras again.

Woods, who hasn’t played competitively since he missed the cut in the 150th Open Championship at St. Andrews last July, will team with top-ranked Rory McIlroy against eight-ranked Justin Thomas and Jordan Spieth in Capital One’s The Match VII on Saturday night under the lights at Pelican Golf Club in Belleair, Fla.

The comeback was supposed to start last weekend in the Hero World Challenge at Albany Resort in New Providence, The Bahamas, but Woods was forced to withdraw from the tournament he hosts because of planter fasciitis in his right foot, which he nearly lost in a rollover SUV accident almost two years ago in Southern California.

Woods would have had to walk in the Bahamas, but he can ride a cart in The Match VI and also in the PNC Championship alongside his 13-year-old son, Charlie, next week at Ritz-Carlton Golf Club in Orlando, Fla.

“I can hit golf balls, it’s just a problem of getting from point A to point B,” Woods said of the current problem with his foot. “I’ve got to get this plantar (fasciitis) to heal, and it just takes time. It’s nothing that happens overnight.”

Woods, who will turn 47 on Dec. 30, has teamed with the likes of Thomas, Mark O’Meara and Notah Begay in the past, but this pairing is something different.

It matches up perhaps the best golfer of all-time with the best in the world right now.

“I’ve had all different types of partners,” Woods said on Wednesday. “I’ve had guys drool on themselves, miss belt loops, (wear) wrong hats, can’t find the golf shoes they’re supposed to wear, wrong color … and we go out and win golf matches. I really don’t care. They play well, we play well as a team, doesn’t matter what happens. And we go out and put a point on the board for our side. I can tell you one thing, I have the No. 1 player on my team, so I’m good.”

“The charitable aspect of the event, and of all the Matches, this being the seventh, we all have tried to figure out a way to give to the local area. Unfortunately, here, it’s Hurricane Ian, which devastated the West Coast of Florida. Some of the people are without homes, power, loved ones. … From this Match, a considerable amount of the charitable dollars will be going there. Personally, I’m giving money to that cause as well.”

McIlroy, who has won 35 titles as a pro including 23 on the PGA Tour with four major championships, is only a victory in the Masters short of becoming the sixth player to complete the Career Grand Slam.

In 2022, he joined Henrik Stenson of Sweden as the only players to win the year-long FedEx Cup Race on the PGA Tour and the Race to Dubai on the DP World Tour in the same year.

Yet McIlroy almost seems in awe of teaming with Woods.

Spieth and Thomas went 4-0 as a team to lead the United States to victory in the 2022 Presidents Cup, so they should provide Woods and McIlroy with a pretty good challenge.

Thomas made a light-hearted comment at the press conference when asked about the match-up.

“OK, you have more majors than us,” Thomas said to Woods and McIlroy. “Plus, you both have an airplane and we don’t.”

Each of the four golfers will play his own ball in The Match VII, which will be played in the match-play format over 12 holes. It will be televised on TNT  at 6 p.m. EST/3 p.m. PST and streamed worldwide.

Proceeds from The Match VII will be steered toward disaster relief for those affected by Hurricane Ian, a Category 4 hurricane that tore through Florida’s West Coast in late September and early October, and was the state’s deadliest hurricane since 1935.