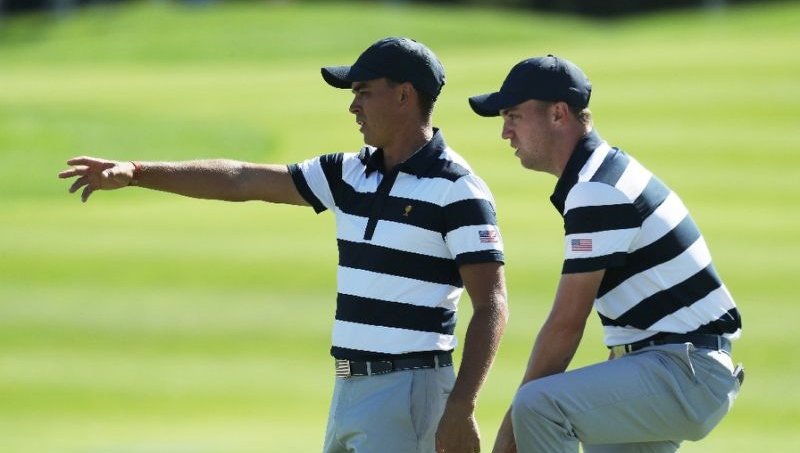 The United States, trying to continue its domination of the International team, won the first three matches and held a 3½ to 1½ lead after the first day of foursomes play at the 12th Presidents Cup in windy conditions at Liberty National Golf Club in Jersey City, N.J.

It came on a day when Presidents Bill Clinton, George W. Bush and Barack Obama greeted the players on the first tee.

Rickie Fowler (pictured left) and Justin Thomas (right) started things off for the Americans with a 6-and-4 rout of Charl Schwartzel of South Africa and Hideki Matsuyama of Japan; Jordan Spieth and Patrick Reed downed Emiliano Grillo of Argentina and Si Wo Kim of South Korea, 5 and 4, while Dustin Johnson and Matt Kuchar played bogey-free in a 1-up victory over Adam Scott of Australia and Jhonattan Vegas of Venezuela.

“It was nice to get the first point for the team.”

Said Thomas, the PGA and FedExCup champion but a Presidents Cup rookie: “I was a little nervous on the first tee, but after a few holes it’s just golf, it’s what we do. It was good to be with Rickie because he’s done this before.”

The U.S., which holds a 9-1-1 lead over the Internationals, is 8-0 when leading after the first day.

Spieth and Reed, who never trailed, took four holes in a row through No. 7 and finished off their victory by claiming three of the last four and increased their record to 6-1-2 while playing together for the U.S. in the President and Ryder cups.

“It was easy to get going at the start, seeing the Statue of Liberty (across the Hudson River in New York) and hearing the National Anthem,” said Reed, whose nickname for the way he plays in these events is “Captain America.”

“I was hyped up, ready to go, but Jordan calmed me down a bit and we played well.”

Added Spieth: “We basically played solid, but I dropped a bomb for a birdie at No. 11 and we stole one when Patrick chipped in on 12. We putted well all day, didn’t make a mistake inside 10 feet on the greens.”

Phil Mickelson and Kevin Kisner held a 3-up lead over Jason Day and Marc Leishman of Australia after six holes, but the Aussies rallied and held a 1-up lead before Mickelson won the 17th hole with a three-foot par putt and barely missed a seven-footer for par on the last to halve the match.

Louis Oosthuizen and Branden Grace of South Africa, who combined for a 9-0-1 record two years ago in the Presidents Cup in Sourth Korea, gave the Internationals their only full point of the day with a 3-and-1 victory over U.S. Open champion Brooks Koepka and Daniel Berger by winning the last three holes.

“We play similar games,” said Grace, who teamed with Oosthuizen to post a 4-0 record in the two-man events in South Korea. “We grew up on the coast in South Africa and the windy conditions today suited us.