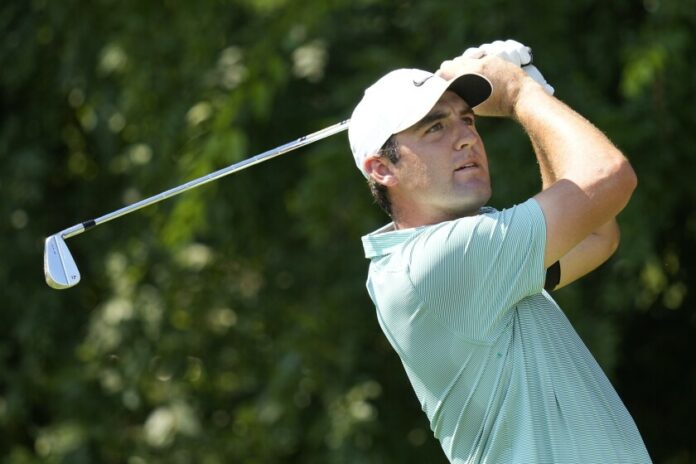 Top-ranked Scottie Scheffler’s lead is shrinking, but he’s still on top of the leaderboard in the Tour Championship.

Scheffler, who started the season finale with a two-stroke lead under the unique scoring system in the PGA Tour season finale and stretched to six at one stage in round two, was one shot ahead of fifth-ranked Xander Schauffele when play was halted for the second time in round three because of thunder and lightning in the area at East Lake Golf Club in Atlanta.

Schauffele and Scheffler are two of 14 players who were still on the course in elite 29-man field when the end came and they will return on Sunday morning to complete the third round before playing the final round to determine who will claim the 2022 FedEx Cup and the $18-million first prize.

Scheffler, who opened with 65-66, was even par for the day through 12 holes with one birdie and one bogey for a score of 19-under-par at the end of the day, while Schauffele, after rounds of 66-63, made four birdies in the first seven holes and pulled even twice, but also had three bogeys.

“I was feeling all right,” said Scheffler, who has claimed his first four PGA victories this season, including a win in the Masters. “I wasn’t playing my best, but I was kind of hanging in there. I was looking forward to giving myself some opportunities at the end, but then the horn went off.

“I mean, I think you kind of get into the rhythm of the round and then the horn goes off, it definitely stinks and nobody wants to deal with that, but I think it’s just part of it. Then going into tomorrow, just keep doing what I’ve been doing all week and just go out and try to play good golf.

“I haven’t been in this position before, so it’ll be a little new. But at the end of the day, it’s still a golf tournament and I’ve been in some intense situations this year, the Masters definitely being one of them and the other three tournaments I won, so it should definitely be something similar tomorrow.”

Said Schauffele, the 2021 Olympic Gold Medalist from La Jolla and San Diego State who has won three times this season: “Well, we’re in the middle of it. Yeah, it was an up-and-down day. Maybe a good thing to restart, kind of get focused for tomorrow. I mean, those things are coupled. Once your mind goes, the body goes. Just the same stuff. It’s hot and sweaty for everybody.

“It’s hard to stay focused. I think I had a few moments today where I had a little lapse in focus, which I didn’t have the first two rounds. I’ll just get a lot of sleep, try to rest up tonight and get some good recovery in, and really just plot away tomorrow. Only five holes and then 18 after that. Plenty of time to make something happen.”

Sungjae Im of South Korea made three birdies and a 12-foot eagle putt at No. 6 in a span of four holes on the front nine and was three back in third at 16-under after making his first bogey at No. 14, while fourth-ranked Rory McIlroy of Northern Ireland, a two-time FedEx Cup champion, sank a two-foot eagle putt at No. 6 and was at 15-under and in a tie for fourth with fourth-ranked Patrick Cantlay of Los Alamitos of UCLA, who birdied three of the first seven holes, sixth-ranked Jon Rahm of Spain, who made five birdies through 15 holes, and Sepp Straka of Austria, who had seven bridies through 15 holes.

Hideki Matsuyama of Japan collected four birdies on each nine and a single bogey at No. 10 in a 63 and was six behind in solo ninth at 13-under, while Max Homa of Valencia and Cal, who shot 62 in round two, made four more birdies in 16 holes and was seven down in a tie for 10th at 12-under with Tom Hoge, who had 10 birdies on the front nine and also was through 16 holes, and Joaquin Niemann of Chile, who had four birdies when the end came for him after 14 holes.