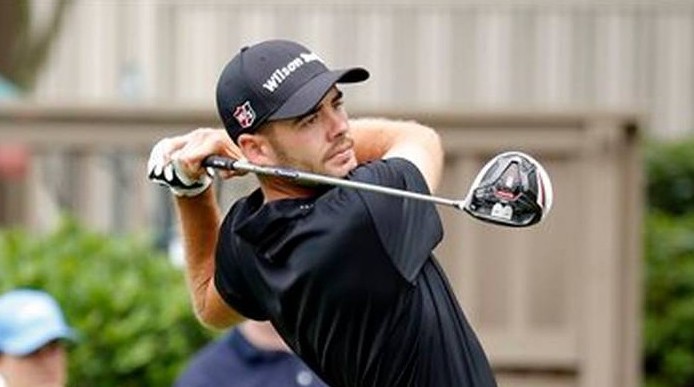 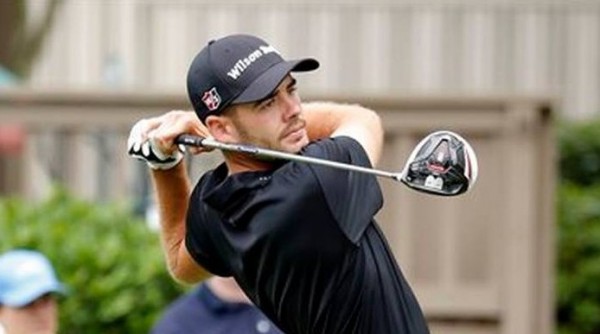 Troy Merritt shot a blistering 10-under-par 61 on Saturday to tie Kevin Chappell for the lead after three rounds of the Quicken Loans National at Robert Trent Jones Golf Club in Gainesville, Va.

Tournament host Tiger Woods, who seemed to be breaking out of a two-year skid with opening scores of 68-66, stumbled to a 74 and was nine strokes behind Merritt and Chappell in a tie for 42nd.

Merritt (pictured) had missed the cut in his last five events and seven of nine on the PGA Tour since he finished third in the RBC Heritage in May when he shot 61 in round two. He birdied six of the first seven holes and added five more birdies in a span of six holes through No. 17, making his lone bogey on the eight hole.

“I didn’t think I was that far off and I found something this week,” said the 29-year-old Merritt, who has never won on the PGA Tour but captured the 2009 Mexico Open on what is now the Web.com Tour. “I’ve been working hard on it the last few days.

“Apparently playing on Saturday is a good thing. Might want to try it more often. … The biggest difference was the first two days I missed 11 putts inside of 12 feet. I found a little bit of something on the putting green. Squared my shoulders up just slightly. As a result, I was picking the ball up out of the hole versus tapping it in.”

Chappell, the 2008 NCAA champion from Fresno and UCLA, carded a 67 to equal Merritt at 14-under 199 for 54 holes. He holed a five-foot birdie putt on No. 17 to regain a share of the lead after making his only bogey of the day one hole earlier.

“You know, I’ve done a really good job of functioning this week,” said Chappell, whose only pro victory came in the 2010 Fresh Express Classic at TPC Stonebrae in Hayward, also on the Web.com Tour. “‘That’s the grass. That’s the sky. That’s the hole. That’s my ball.’ Shoot the lowest score tomorrow and I win the golf tournament.”

Rickie Fowler of Murrieta, the Players champion, also had a share of the lead coming home before hitting a shot into deep rough and eventually missed a 28-foot par putt on the 17th hole and was one stroke back in solo third after a 68.

“I’m looking forward to being out in front and making some noise, see if we can chase the guys down early and get things going,” said Fowler, who holed a 70-foot birdie putt on the fourth hole.

David Lingmerth of Sweden, who captured his first PGA Tour title in June at the Memorial, overcame a double bogey 5 on the ninth hole to finish at 68 and was two back in a tie for fourth with Charles Howell III, Whee Kim of South Korea and Jason Bohn, who all had 67s.

Defending champion Justin Rose of England carded a 65 and was another shot behind in a tie for eighth with Bill Haas, the 2013 National champion, who had a 64 that included an eagle on the fifth hole, Carl Pettersson of Sweden, who also totaled 64, and 36-hole leader Ryo Ishikawa of Japan, who came in at 71.

Woods opened with seven consecutive pars, but then played a six-hole stretch in 4-over including a double bogey 5 when he hit into the water on the 11th hole, and had his only birdies on the 15th and 16th holes.

“I was waiting for the one moment, the one shot,” Woods said later. “I couldn’t find it.”

That’s not unusual for him these days.