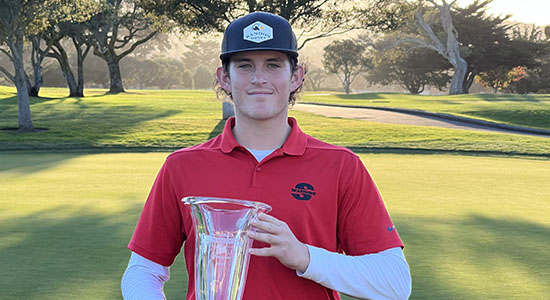 Nathan Jetton of Diamond Springs chipped in for a birdie on the first playoff hole to overcome Michael Carrillo of Chualar and Mikey Burkland of Alamo, capturing the 21st Amateur Golf.Com 2022 Christmas Classic Presented by Callaway Golf at Del Monte Golf Course in Monterey.

And it wasn’t as easy as it sounds.

Jetton, who is a caddie at Bandon Dunes Golf Resort in Bandon, Ore., tried to reach the green in two with driver off the deck on the par-5 extra hole, but left his shot short and in the trees before hitting his third shot short of the green.

That left him a delicate chip shot that he hit so perfectly that rolled in like a putt.

“I saw where Michael’s drive was and figured he could get home in two,” Jetton in explaining his second shot that nearly proved to be costly before he saved himself with the brilliant chip shot. “So I decided to hit driver off the deck.”

Carrillo failed to get up-and-down for birdie from pin high in two, and when Burkland’s birdie putt rolled past the hole, Jetton was the winner.

Jetton, who also won the Chico City Championship earlier this year, birdied the last two holes of regulation to post a score of 71-71—142, two-under-par, and Burkland also closed with two birdies to shoot 69-73—142, while Carrillo held a one-stroke lead before a bogey at No. 18 left him at 71-71—142.