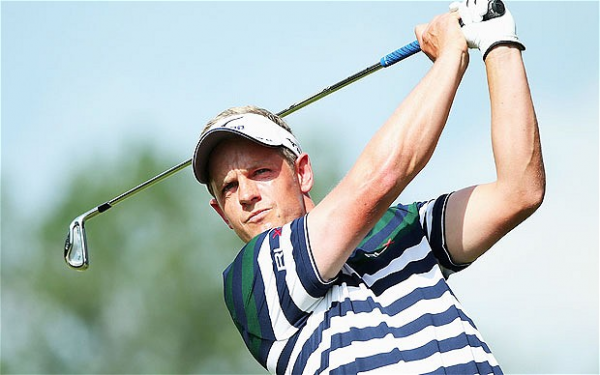 Luke Donald of England shot 5-under-par 66 in the third round to take a two-stroke lead over John Huh in difficult weather conditions in the RBC Heritage at soggy Harbour Town Golf Club in Hilton Head, S.C.

Donald, trying to regain the form that took him to No. 1 in the World Golf Rankings for a total of 56 weeks in 2011 and 2012, kick-started his round with a 23-foot eagle putt on the third hole and added four birdies on the back nine.

“I felt very confident that I was going to play well today and I did,” said Donald, who hasn’t won on the PGA Tour since the 2012 Transitions Championship. “I’ve always liked this golf course and I have played well here. … I’m just going to try to do the same thing tomorrow.

“It wasn’t bad on the front nine, but the wind picked up on the back nine and the conditions were pretty difficult, especially 18. Still, I was able to give myself plenty of chances and made some of them.”

Huh, who lives in Los Angeles and attended Cal State Northridge in 2008, posted his second straight 68, carding his only bogey on the final hole. He is seeking his second PGA Tour victory, having won the 2012 Mayakoba Golf Classic.

Charl Schwartzel of South Africa, the 2011 Masters champion, shot 68 and was three shots back in a tie for third with Nicolas Thompson, who also had a 68, Jim Furyk, the 2010 Heritage champion, who had a 71, and Ben Martin, who also totaled 71.

Matt Kuchar, in the mix for the fourth consecutive week, posted a 70 and was four strokes back in a tie for seventh with Brian Harman, who had a 69, Russell Knox, who shot 68, Matt Every, who had a 70, and Brian Stuard, who came in at 68.