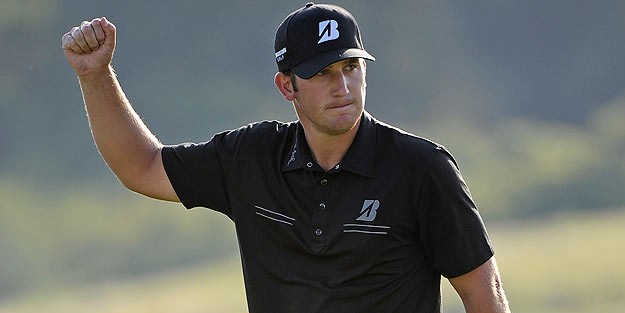 Kevin Chappell was all smiles.

Chappell, from Fresno and UCLA, posted a 7-under-par 64 to take a one-stroke lead over Jimmy Walker and Paul Casey of England midway through the Deutsche Bank Championship, second event of the FedEx Cup playoffs, at TPC Bost6on in Norton, Mass.

“There’s no secret that the more I’m smiling, the more I’m having fun, the better I’m playing,” said Chappell, who is seeking his first PGA Tour victory after finishing second three times this season.

“The next 36 holes are going to seem like a long time for me. But I feel comfortable in this situation and each time I get near the lead I feel more comfortable.”

Chappell collected six birdies and an eagle on the seventh hole, where he chipped in from 37 yards, on his way to posting a 36-hole score of 11-under 131, taking the lead with a three-foot birdie putt on the 16th hole.

Casey, playing alongside Chappell, had a second straight 66, while PGA champion Walker sank a seven-foot eagle putt on the seventh hole while matching Chappell’s 64.

Brian Harman carded a 65 is two shots back in solo fourth, while U.S. Open champion Dustin Johnson had a 66 and is three behind in a tie for fifth with Smylie Kaufman, who also came in at 66.

Patrick Reed, who won The Barclays last week to open the FedEx Cup Playoffs, recorded a 67 and was four shots down in a six-way tie for seventh that included Olympic champion Justin Rose of England, who also had a 67.

Ryan Moore, the 18-hole co-leader along with James Hahn, had a 70 and also is among those tied for seventh. Hahn, from Alameda and Cal, struggled to a 74 and skidded to a tie for 46th, eight behind Chappell.

Defending champion Rickie Fowler shot 71 and is tied for 54th.

Top-ranked Jason Day of Australia missed a birdie putt on No. 18 wound at 71, making the cut on the number in a tie for 62nd — 10 strokes down.

World No. 7 Bubba Watson shot 72 and missed the cut by one stroke.