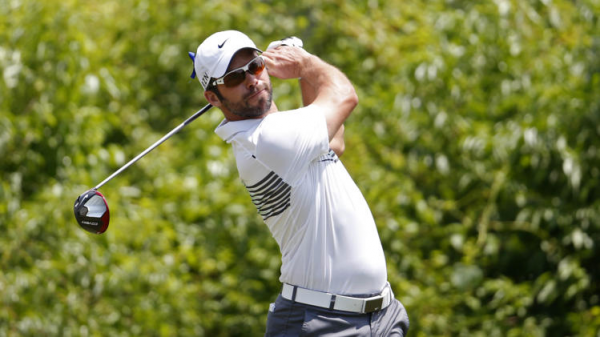 The 36-year-old Casey, who was No. 3 in the World Golf Rankings in 2009 but has struggled since sustaining a right shoulder injury in a 2012 snowboarding accident, started on the back nine and holed an 18-foot eagle putt at No. 15 in addition to carding three birdies and a bogey on each nine.

“I think you have to go back to the Irish Open, which I won last year, for the last time I hit the ball this well for two days, 36 holes,” said Casey, whose 15 pro victories include only the 2009 Shell Houston Open on the PGA Tour. “I feel good and I have to keep it going on the weekend, and have a good finish, win, lose or draw.

“It’s been a long time since I was No. 3 in the world and a lot has happened since then. But I’m only looking forward, not back. I worked hard with (instructor) Peter Kostis to change my swing, but now I’m not thinking about it, and that’s the way I’ve done it when I played my best.”

Watson, who opened with a 66, hit his second shot from 242 yards two within two feet for an eagle on No. 15 to close to within one shot of Casey, but made bogeys on the last two holes to wind up with a 69.

Chris Kirk, who won the McGladrey Classic early in the 2013-14 season for his second PGA Tour victory, followed a 66 by making two birdies in the last four holes to shoot 70 and was four strokes back in third.

Rory McIlroy, who led with a 63 in the first round, struggled to a 78 that included three consecutive double bogeys through No. 15, and was tied for 25th, but said his rough day had nothing to do with a left knee injury he sustained the day before.

Adam Scott, the No. 1 player in the world who won the Crowne Plaza Invitational at Colonial last week, recorded a 70 and was five shots behind in a tie for 10th.

Phil Mickelson, seeking his first top-10 finish of the season, followed an opening 72 with a 70 and was tied for 39th.