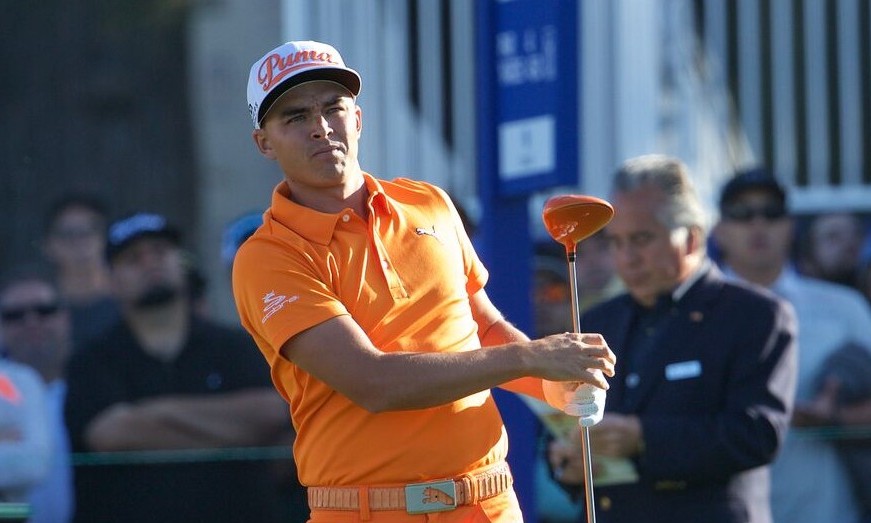 Rickie Fowler lost in a playoff to Hideki Matsuyama of Japan in the Waste Management Phoenix Open the last time we saw him, but he’s right back at the top of the leaderboard.

Fowler, from Murrieta in Southern California, carded a second straight 4-under-par 66 to take a one-stroke lead over Jimmy Walker in the Honda Classic on the Champion Course at PGA National Golf Club in Palm Beach Gardens, Fla.

Rickie, who became the first golfer to play the first two rounds of the Honda bogey-free since the tournament moved to PGA National and also achieved that for the first time in his PGA Tour career, took the lead with a 22-foot birdie putt as he finished his round on the ninth hole.

“I’m definitely pleased about it,” said Fowler, who last month won the Abu Dhabi HSBC Golf Championship. “I didn’t hit the ball as well as I did yesterday, but I did hit some good drives and made a few more putts.

“I kept myself in it with some up-and-downs, made some good putts, and continued to move forward. Made a couple birdies coming in, so it was a little bit of a bonus there at the last. It’s nice to go bogey-free, especially around this place.

“It was a good, solid day and I’m looking forward to the weekend.”

Walker, who won twice in each of the last two years but has yet to break through this season, dropped in a 40-foot bomb of a putt for an eagle on the 18th hole to also shoot 66 and claim sole possession of second.

Sergio Garcia of Spain, who shared the first-round lead at 65, came back with a 69 and was two shots behind in solo third, while Adam Scott of Australia was another stroke behind in fourth after a bogey-free 65 that included a 10-foot eagle putt on the third hole.

“It was a great round today,” said Scott, who has won 11 times on the PGA Tour, the list in the 2014 Crowne Plaza Invitational at Colonial. “It was really good from tee-to-green, not perfect, but pretty good for around this place.

“I could see the leaders going really low before I teed off, so I knew I needed to shoot a good score to stay in it for the weekend. It was really good for my confidence.”

Hudson Swafford finished off a 65 with a tap-in birdie on the ninth hole and was four shots down in a tie for fifth with Blayne Barber, who sank a 24-foot birdie putt on the 18th hole to wrap up a 66.

John Senden of Australia carded a 66 and was another stroke back in a tie for seventh with Scott Brown, who had a 67.

First-round co-leader Michael Thompson struggled to a 73 and was six shots back in a tie for ninth with Luke List (65), Justin Thomas (69), David Lingmerth (71) of Sweden and William McGirt (72).

Phil Mickelson failed to make a birdie while shooting 74 despite hitting 15 greens in regulation, but made the cut right on the number in a tie for 54th, while third-ranked Rory McIlroy posted a second 72 and missed the weekend by one stroke.